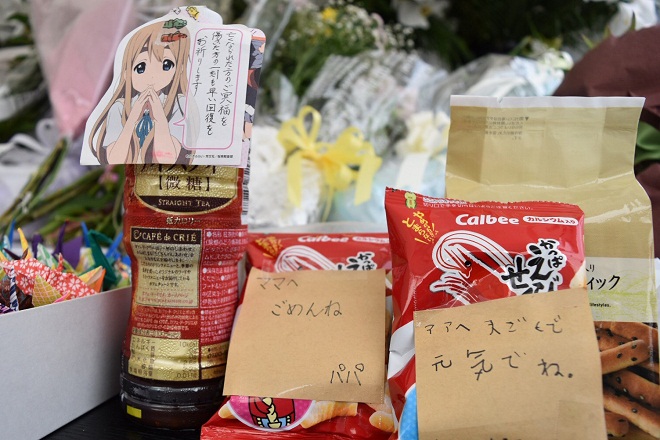 Kyoto--Kyoto Animation Co., whose No. 1 studio was hit by an arson attack that killed 35 people, has been receiving support in diverse forms, including non-monetary aid.

Masanori Fukusumi, a 58-year-old bus driver from the town of Seika in Kyoto Prefecture, found time between his shifts to donate his blood at a Japanese Red Cross Society facility in the city of Kyoto, the capital of the western Japan prefecture. About 30 years ago, he drove buses that passed in front of the studio in the city's Fushimi Ward.

"I think some employees of Kyoto Animation used the buses," he recalled. "I came to donate my blood because I'm healthy and may therefore be able to help out in some way."

Ten Kyoto Animation employees remain hospitalized due to burns or other injuries from the attack on July 18.

According to the Red Cross, blood is needed to create ingredients for albumin preparations, used to treat severe burns. Messages calling for saving Kyoto Animation with blood donations are spreading on Twitter.

Fukusumi said he hopes that he "could be of some help" although it is not certain if his blood will be used to help the arson attack victims.

A 16-year-old high school second-grader is supporting Kyoto Animation, commonly known as KyoAni among fans, by watching its anime works.

"I will support (KyoAni) with my feeling of love (for the company and its works)," she said after watching its latest work, "Free! Road to the World--Yume," for the second time, at a theater in Tokyo's Katsushika Ward. "I don't have money, but I plan to come to watch it as many times as I can."

The company had planned before the arson attack to release a sequel to the film next year.

"I think it will take time, but I want (KyoAni) to definitely make the sequel," she said.

As of Friday, the company had received a total of about 621 million yen from domestic and overseas donors at a bank account it opened last Wednesday to accept financial aid. Jiji Press