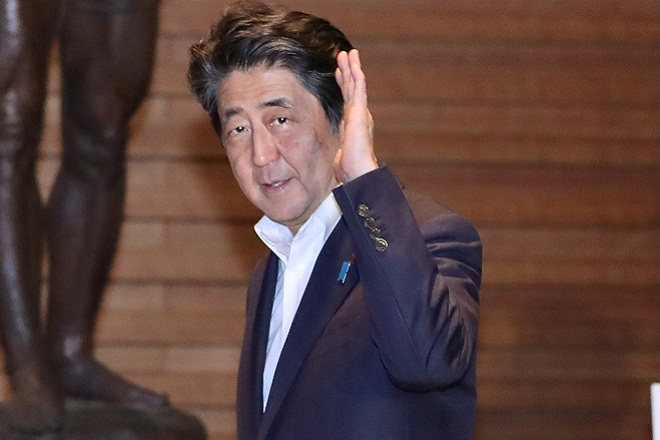 Abe aims to lead G-7 discussions on the global economy, which has been increasingly shaky amid escalating U.S.-China trade friction, and how to break the impasse in the efforts to denuclearize North Korea, informed sources said.

"I want to produce results on global challenges such as realizing sustainable growth of the world economy, promoting free trade and fighting climate change, as well as on regional issues, including the situations in North Korea and Iran," Abe told reporters at the prime minister's office ahead of his departure from Tokyo International Airport at Haneda.

"I'd like to have frank discussions (with U.S. President Donald Trump) from the perspective of continuing diplomatic efforts over the Middle East situation," Abe said, referring to his bilateral meeting with the U.S. leader on Sunday, to be held on the fringe of the G-7 summit in Biarritz, southwestern France.

"We must proceed with Japan-U.S. trade negotiations to produce a win-win result," he added.

Abe is set to attend a summit among Britain, Canada, France, Germany, Italy, Japan and the United States for the seventh consecutive year since he came back to the post of prime minister in late 2012.

Including during his first, one-year tenure as prime minister from September 2006, this will mark Abe's eighth participation in a G-7 summit, the second most following German Chancellor Angela Merkel. The Biarritz session will be the 14th G-7 summit for Merkel.

At a time when the G-7 unity has been shaken by rows between the United States and European members, Abe is seen aiming to serve as a mediator between them at the Biarritz summit. Abe is "highly trusted" by his G-7 partners, a Japanese Foreign Ministry official noted.

At the first Japan-U.S. summit in about two months, Abe and Trump are expected to coordinate the countries' policies toward North Korea, which has of late repeatedly fired projectiles, including apparent short-range-ballistic missiles, informed sources said.

They are also likely to confirm the significance of collaboration among Japan, the United States and South Korea in dealing with North Korea although Seoul decided on Thursday to scrap its general security of military information agreement, or GSOMIA, with Tokyo, which enables the two East Asian neighbors to share defense secrets, the sources said.

Abe and Trump are also expected to exchange views on a U.S.-proposed coalition of countries aimed at ensuring safe navigation in areas around the Strait of Hormuz and Japan-U.S. trade talks.

Abe will arrive in Bordeaux, southwestern France, on Friday afternoon local time for transit, before entering Biarritz on Saturday.

He is scheduled to hold a news conference on Monday, after the end of the G-7 summit, and return home on Tuesday. Jiji Press