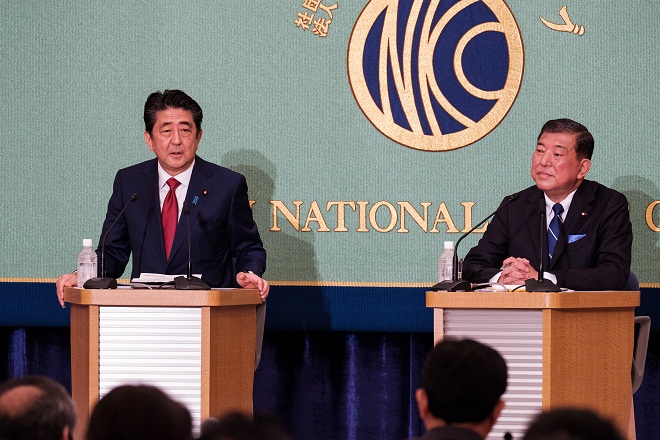 Tokyo- Shinzo Abe, president of the ruling Liberal Democratic Party, and his sole opponent in the party's leadership race, Shigeru Ishiba, traded barbs on campaign issues in a debate session on Friday.

They held heated discussions on Abe's handling of the government as prime minister and Ishiba's main campaign pledge to revitalize regional economies.

It was the first time for the two candidates in the LDP presidential election, set for Thursday, to hold a policy debate since the official campaign period for the contest started on Sept. 7. The LDP president is effectively assured of the prime ministership because of the party's comfortable majority in the House of Representatives, the all-important lower chamber of parliament.

"Democracy functions only if inconvenient information is not held back and sincere explanations about it are given to the people," Ishiba, former secretary-general of the party, said, referring to a series of favoritism allegations against the Abe administration.

He also stressed the need to respect minority opinions in a Japanese political situation like today's, where there is the only strong leader.

Abe responded, "Looking around the world, Japan has a comparatively solid foundation of democracy."

Meanwhile, the prime minister apologized for document manipulation at the Ministry of Finance that was related to one of the favoritism scandals.

In discussing regional revitalization, Ishiba said, "I don't accept the idea that the growth of Tokyo and large companies will have spreading effects on regional economies and small companies."

"It's necessary to tap the latent strengths of regional economies, small companies and the industries of agriculture, forestry and fisheries," Ishiba said, demanding that the Abenomics economic policy be revised.

Abe argued back that his policy is not about a conflict between Tokyo and regional economies.

"If the economy in Tokyo improves, the prices of agricultural products from rural areas will go up," Abe said. "There is a correlation."

Pointing out that regional economic indicators have improved, Abe said he doubts that there was a problem with Abenomics.

Regarding his pledge to carry out social security reforms over a three-year period, Abe said, "I want to establish a system to offer people the option of postponing the starting age for receiving public pensions to over 70."

In response to the recent spate of natural disasters that have hit Japan, Abe said his government will implement emergency measures intensively over three years to make the country more resistant to disasters.

The debate session was originally planned to be held on Saturday. It was postponed due to a giant earthquake that rocked Hokkaido, northern Japan, on Sept. 6. Jiji Press