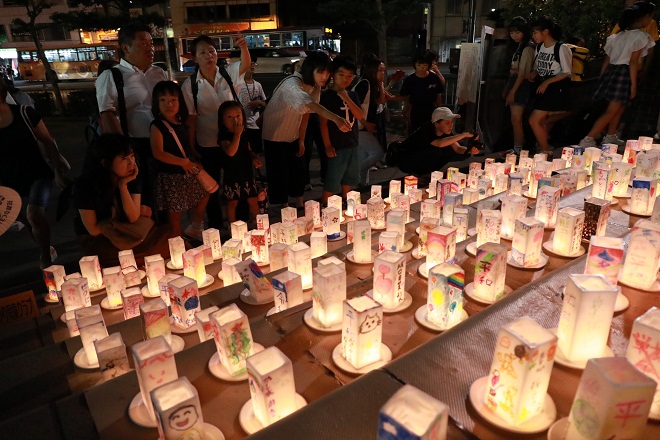 Nagasaki--A poem by a hibakusha atomic bomb survivor was quoted Friday by Nagasaki Mayor Tomihisa Taue in a peace declaration to mark the 74th anniversary of U.S. atomic bombing of the southwestern Japan city.

It was the first time for a Nagasaki mayor to cite a hibakusha's poem in the annual declaration.

Describing the devastation of the atomic bombing in the poem, Kazuko Yamaguchi, 91, who lost all of her family in the bombing, says the world must "never repeat" the tragedy.

In 1945, Yamaguchi, then 17, was living with her mother and two sisters. Her father had died sometime before.

When the bomb exploded at 11:02 a.m. Aug. 9, she was at an armaments factory one kilometer from ground zero.

"I saw a white flash, and the next moment I lost my senses," she said. After a while, she found herself buried under a collapsed ceiling.

What she saw outside was a "hell-like world," she recalled.

With her face and arms badly burned, she barely escaped death, but her mother and sisters did not.

The 17-year-old told herself in a deep sorrow to "survive alone."

She worked hard and supported her husband's business earnestly to live through the postwar period.

Around 1979, when her life became easier, an advertisement for poems about atomic bombs caught her eye.

"Until then, I had been trying not to think or remember the bombing, but I couldn't help looking back," she said.

A flood of words came out once she started writing about the moment of peace she felt when she looked up to the sky.

"My mother, sisters and many other people burned in the fire of the atomic bomb reached out to me and made me write," Yamaguchi said.

On the current international situation, she expressed concerns, saying, "I sense signs of war."

About the mayor's use of her poem in the declaration, she said, "It would be great if it gives people a chance to think about the miseries and horrors caused by atomic bombs and the foolishness of war."

"I want many people to think seriously as their own problem, as if they or their family were victims of atomic bombing," she continued. Jiji Press