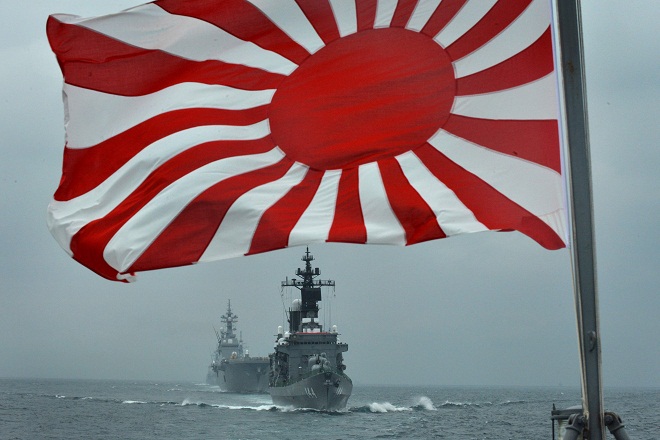 Tokyo--Japan lowered the priority of South Korea in terms of security cooperation in its annual defense white paper released Friday, amid deterioration in the bilateral relationship.

In a chapter discussing Japan's security cooperation with countries other than the United States, the key alliance partner, the fiscal 2019 defense white paper listed South Korea in fourth place after Australia, India and the Association of Southeast Asian Nations.

In the fiscal 2018 paper, South Korea was in second place after Australia.

Negative responses of South Korea are affecting defense cooperation and exchanges between Japan and South Korea, said the latest white paper, which was reported by Defense Minister Taro Kono at a cabinet meeting the same day.

The request over the flag, which is regarded in South Korea as a symbol of Japan's past militarism because it had been used by the now-defunct Imperial Japanese Navy, forced the MSDF ships to skip the fleet review.

The white paper also mentioned an incident in which a South Korean warship allegedly directed its fire-control radar at an MSDF patrol plane late last year and a recent South Korean decision to scrap the General Security of Military Information Agreement, or GSOMIA, with Japan, an accord aimed at allowing the two Asian countries to share defense secrets.

On North Korea, the report said that after a series of nuclear tests, Pyongyang is believed to have succeeded in miniaturizing its nuclear weapons and developing nuclear warheads to load them onto ballistic missiles.

North Korea is highly likely to be making progress on its nuclear weapons program even after the first-ever summit in June last year between U.S. President Donald Trump and North Korean leader Kim Jong Un, the report said.

North Korea is a serious and imminent threat to Japan's security, it said.

In a section describing the military trends of foreign countries, the white paper listed China, which is expanding its maritime activities mainly in the East China Sea, in second place after the United States for the first time, ahead of North Korea.

The report expressed Japan's strong concerns over China's rapid development of capabilities in such new fields as space, cyberspace and electromagnetic waves.

Due to these developments as well as a lack of transparency in China's defense policy and budget, China is a source of great security concern for the region and international society, the report said.

The white paper also highlighted competition among the United States, China, Russia and other major countries to develop weapons utilizing cutting-edge technologies in the new fields.

Japan plans to promote cooperation with its allies and partners in order to strengthen its response abilities in each new field, it said. Jiji Press