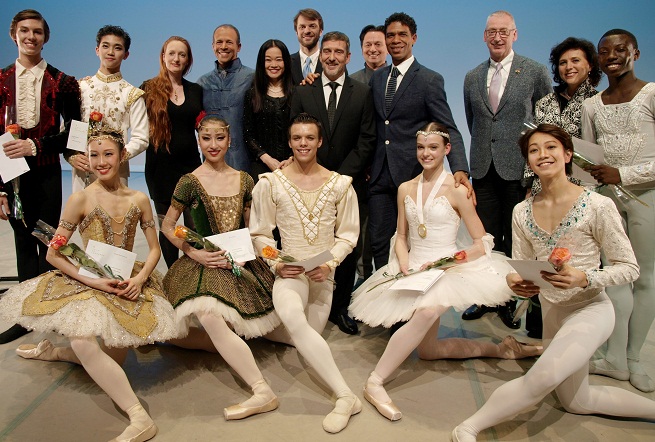 Two other Japanese dancers, Yu Wakizuka and Mio Sumiyama, came to fourth and eighth, respectively, at the 47th annual competition in the Swiss city of Lausanne.

Sasaki, 18, from the city of Higashiosaka in Osaka Prefecture, western Japan, started to attend a ballet school run by her grandmother at the age of 3. She now learns ballet in Zurich, Switzerland.

"I didn't expect to win a prize. It's just like a dream," Sasaki told reporters.

"With the award, I've taken a step to become a professional ballet dancer," said Sasaki, who aims to perform at a European ballet troupe. "This is my starting point."

"I could dance comfortably," said Wakizuka, 17, from the city of Osaka. "Although I made a mistake, I don't regret it. I had a good experience," he added.

"I could dance without becoming nervous," Sumiyama, 18, from Tokyo's Setagaya Ward, said. "I'm really happy to win a prize," she said.

This year's top prize winner was Brown Mackenzie of the United States. The second prize went to Figueredo Gabriel of Brazil.

A total of 74 dancers from 19 countries competed in this year's Prix de Lausanne. Of them, 21, including four Japanese, were selected as finalists.

Prize winners are each awarded a scholarship and one year of free tuition at one of the Prix de Lausanne's partner ballet schools. Jiji Press