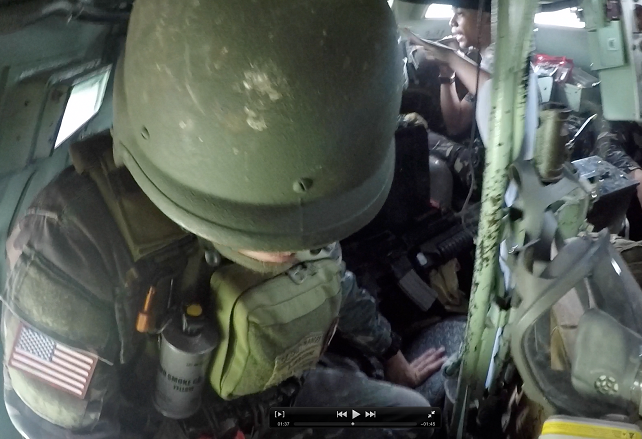 The US not only provided intelligence and military expertise but also gave medical support to government troops engaged in close quarters combat with ISIS-linked gunmen during the five-month long siege in Marawi City.

Video obtained by Manila Shimbun shows a wounded Filipino soldier being rescued and carried inside an armored vehicle where he is given treatment by a soldier wearing a patch with a US flag. The video did not indicate when the incident occurred but was edited last July.

The video was part of footage showing advancing government troops engaging the extremists in the Marawi battle zone. The military has reported 165 soldiers and policemen dead and about 1700 were wounded during the siege which ended on Monday when troops overrun the last building held by extremists.

US embassy spokesperson Molly Koscina said she is “not able to comment on the photos” of the rescue operation sent to her by the Manila Shimbun.

“US forces were present in Mindanao to provide advice and technical assistance only,” she said in reply to questions sent to her by email.

The Westmincom commander said this type of activity is permitted by the Mutual Defense Board and the Security Engagement Board which meets annually to plan and set the direction of joint military activities between the two countries.

“This is purely humanitarian in nature (saving lives) and will greatly enhance the capability of our medics to respond (to) massive casualty management,” Galvez said.

He said that medical assistance training is one of the “most responsive technical assistance the Americans are providing Western Mindanao Command since they established Camp Navarro in 2004.” Westmincom covers Basilan and the Sulu islands where the military has been fighting the Abu Sayyaf and armed bandit groups.

Close to a thousand Maute-Abu Sayyaf gunmen, including their top leaders Isnilon Hapilon and the brothers Omar and Abdullah Maute and a number of foreign fighters, were killed in the drawn-out fighting that destroyed the Islamic City’s business and commercial center.

Military officials have said that many of the wounded soldiers were struck by improvised explosive devices planted in buildings and houses which the gunmen occupied when they attacked the city ion May 23.

President Rodrigo Duterte thanked the US and Australia for the intelligence and military expertise they gave when he spoke during a call made by ASEAN defense ministers and their counterparts from eight ASEAN dialogue nations in Clark, Pampanga last Tuesday. Virgilio Galvez/DMS