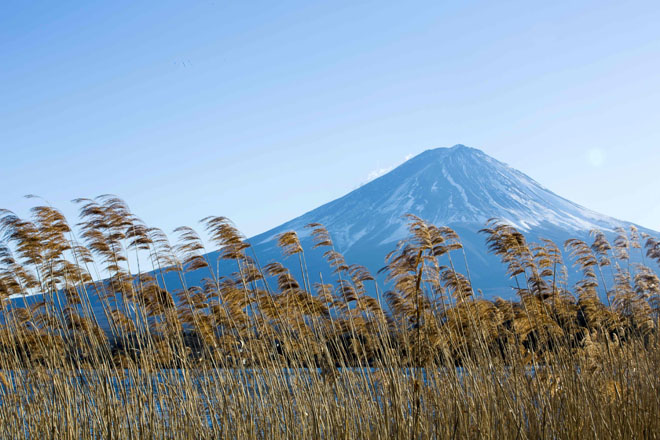 Tokyo--An increasing number of national parks and other scenic areas in Japan are collecting voluntary entry payments from visitors for environmental protection and infrastructure improvement, including the creation of footways and installation of lavatories.

Mount Fuji, Japan's highest mountain at 3,776 meters, straddling Shizuoka and Yamanashi prefectures and registered as a UNESCO World Cultural Heritage site, began to request 1,000 yen per climber in 2014 after a yearlong trial. Officials collect the payments at the start of each trail during the climbing season from July through September.

Visitors to Yakushima, an island in Kagoshima Prefecture known for its wildlife and cedar forests, are asked for payments when entering local mountain areas--1,000 yen for a day trip and 2,000 yen if they stay overnight. Among others, Mount Ibuki, which straddles Shiga and Gifu prefectures, has a collection box near its peak for payments of 300 yen.

Some local governments, including on remote islands in Okinawa Prefecture, collect payments as special-purpose taxes under local ordinances.

The Environment Ministry supports the collection of entry payments for environmental preservation and tourism promotion.

The collection of payments starts after the creation of a consensus among local parties concerned, such as residents, governments and tour operators.

"All the parties involved need to be pulling in the same direction," an official of the ministry's National Park Division said. "There are many issues that need to be sorted out before they start collecting payments."

An official in the Shizuoka prefectural government said, "It's important to make clear how the collected payments are used, so climbers are willing to pay."

For this reason, collectors at the start of each mountain trail explain the purpose of the payments or distribute a brochure to seek understanding from climbers.

Some local governments offer gifts in return for such payments.

For example, the Yamanashi and Shizuoka prefectural governments provide wood tags made from wood from thinning work on Mount Fuji and tin badges with a drawing of the mountain printed on them, respectively. The town of Yakushima offers straps made from local cedar trees. Other such gifts include discounts for hot spring facilities and souvenir shops.

As entry payments are collected on a voluntary basis, local governments are struggling to raise the proportion of visitors willing to make them. While payments collected for climbing Mount Fuji totaled 144.35 million yen during this year's climbing season, payers accounted for 40 pct to fewer than 60 pct and 50 pct to fewer than 70 pct of those who climbed from the Shizuoka and Yamanashi sides, respectively.

"Although payments are voluntary, the sense of unfairness between those who pay and who don't must be reduced as much as possible," a Yamanashi official said.

The Yamanashi government has publicized the need to collect entry payments, via such means as travel magazines and brochures. With the number of foreign visitors to Mount Fuji increasing, the prefectural government is set to step up multilingual advertising.

According to the Yakushima town office, 79 pct of visitors to the island made payments in fiscal 2017, which ended in March 2018. The rate of collection is especially high at bus ticket sales booths because workers ask visitors to make payments together with bus fares.

The ministry plans to conduct hearings with localities that have adopted the collection of entry payments, to gather information for encouraging more localities to introduce the program, the official of the National Park Division said. Jiji Press