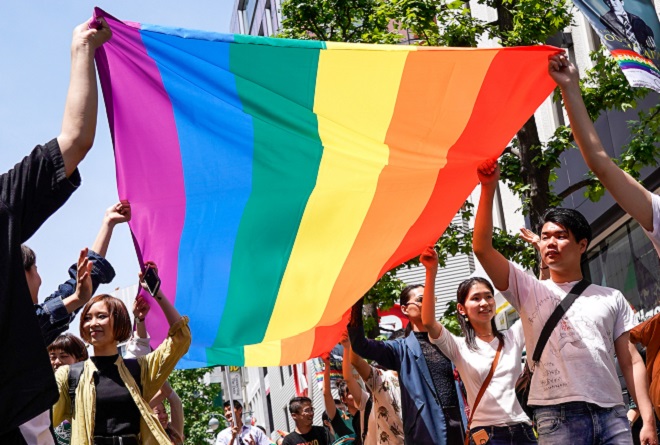 Proclaiming themselves as gay couple, Osaka lawyers siding with LGBTs

Osaka--The Nanmori Law Office's webpage notes: "Yoshida and Minami are gay and a same-sex couple. They will give advice to not only gays but all other LGBTs."

While the law firm in Kita Ward of the city of Osaka deals with such common civil legal issues as divorce and inheritance, it puts emphasis on helping solve problems involving lesbian, gay, bisexual and transgender clients as well as supporting those people's lives.

Lawyers Kazuyuki Minami, 42, and Masafumi Yoshida, 41, opened the office in the western Japan city in 2013 and have since provided consultations to a number of sexual minorities. In one case, a man was extorted for money after someone he met through an online dating site threatened to reveal he is gay.

Pointing out that LGBT people in trouble tend to refrain from filing complaints with police or going to law firms for assistance because they are reluctant to disclose their sexuality, Minami said such people come to the Nanmori office "because they know we are gay lawyers and don't draw a line between heterosexuals and homosexuals."

Minami and Yoshida met online when they were graduate students at Kyoto University. Minami joined a manufacturer later, but he left the job after one year.

"If I continued to work at the company after starting living with Yoshida, I should have kept pretending to be single," he said. "I thought at the time, 'Why do I have to live a double life?'"

With his deceased father a lawyer, Minami decided to pursue a legal career dreaming of opening a law office with Yoshida to spend time together both in private life and at work. Following his partner, he passed the national bar examination in 2008, and they held a wedding in 2011.

Minami is also active in improving public awareness of LGBT people. He publishes books and appears on television shows, believing what he writes and speak about carry weight at a time when homosexuals are "not yet visible enough" in Japan.

"By making 'visible' a gay lawyer couple who are doing well also with their family members, I want to have those who are facing hardships feel even a little bit easier," Minami said. Jiji Press