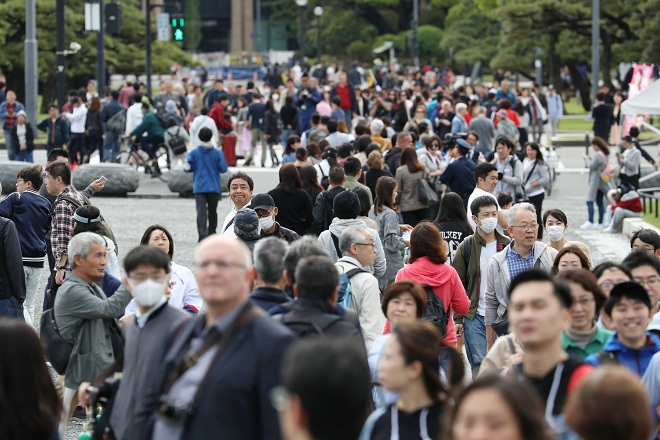 People in Japan hope for peace in new era

Tokyo--People in Japan expressed hopes for peace as Emperor Naruhito ascended the throne and the country's new era, Reiwa, opened on Wednesday.

"I love the festive mood, unlike the previous era change to Heisei," said Yoshiaki Sakai, a 77-year-old resident of Wakayama Prefecture, western Japan.

Sakai was one of many people who gathered at the Imperial Palace in Tokyo. He said he visits the palace every year. "I felt signs that the new era will be a happy time," said Minako Akanuma, a 27-year-old nurse in Nagano Prefecture, central Japan, who visited the palace the day after a trip to the Ise Jingu Shinto shrine complex in Mie Prefecture, also central Japan.

"I never imagined I'd watch the ceremonies in front of the Imperial Palace," Kanagawa said. "It was great that we could greet Reiwa in fine weather."

While gazing at a large screen showing the succession ceremonies in Osaka, western Japan, Hiroshi Komaki, 54, a traveler from Fukushima Prefecture, northeastern Japan, said, "I want the new era to be a peaceful time without disasters."

A 55-year-old housewife from Kanagawa Prefecture, south of Tokyo, said, "I'm in the same generation as the new Emperor and I was really impressed to see him ascend the throne."

In Sendai in the northeastern prefecture of Miyagi, a 55-year-old company worker visited the city office to sign books to commemorate the Imperial succession.

"I wrote my name to show appreciation for Emperor Emeritus Akihito for his many visits to disaster-hit areas," he said of the March 2011 earthquake and tsunami that devastated northeastern Japan.

Megumi Takahashi, 70, who visited the city office with her daughter, said, "I want the new Emperor to follow the example of his father and be considerate to the people." Jiji Press