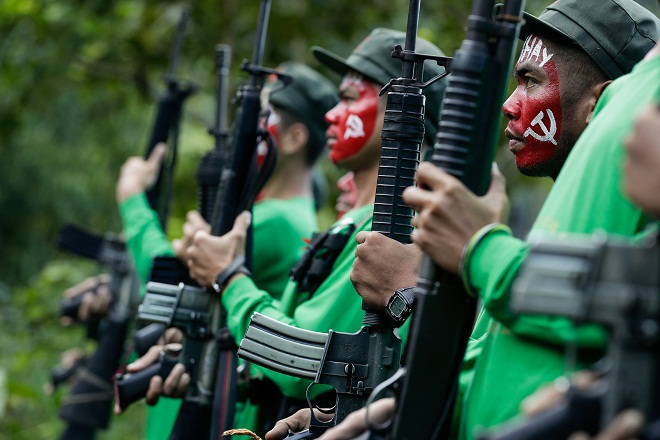 Eighteen months into his presidency, Rodrigo Duterte has made a complete turnaround from his earlier declaration of being a socialist and “the first Leftist president” in the country.

That is according to the Communist Party of the Philippines, considered as the longest-running communist insurgency in Asia as it celebrated its 49th founding anniversary on December 26.

Duterte, who was angered by the atrocities and the extortion activities committed by the New People's Army, the armed front of the CPP, decided to suspend the fifth round of Norway-brokered peace talks on May 27 until he announced his decision to terminate the negotiation in July.

On November 23, he issued Proclamation No. 360 formally terminating the peace process with the National Democratic Front, the political wing of the CPP-NPA.

"In spite of the best efforts exerted by this administration, the NDF-CPP-NPA failed to show its sincerity and commitment in pursuing genuine and meaningful peace negotiations as it engaged in acts of violence and hostilities, endangering the lives and properties of innocent people," the Proclamation read.

On December 5, Duterte issued Proclamation No. 374 to proscribe the CPP and NPA as terrorist organizations under the RA 10168, otherwise known as the Terrorism Financing Prevention and Suppression Act of 2012.

Declaring the CPP-NPA as terrorist groups was largely triggered by an ambush in November by the rebels in Bukidnon, resulting to the death of a four-month old baby girl in Talakag, Bukidnon. The NPA apologized for the incident.

In his public pronouncements, Duterte said if the Maoist-inspired rebels would not stop from their attacks targeting the state forces and from their extortion activities, the government is ready for a prolonged war.

He does not see any peace agreement with the communist rebels because what they want is a coalition government, which he could not give.

"This concerns the country and I have decided to end the talks with the rebels. I don’t think that we will be able to reach an agreement even for 100 years," Duterte said during the ceremonial signing in Malacanang of the 2018 budget and the Tax Reform for Acceleration and Inclusion (TRAIN) Act on December 19.

"The way that they are behaving and I don’t know if (Labor Secretary and peace panel head with the NDF Silvestre) Bebot Bello has any idea of how to proceed forward. But from what I'm seeing and even in my communications with them, it boils down to one thing and apparently they really would want to have a coalition government. I don't have any problem with that, except that as I have said before in many of my statements previously, I cannot give to them or share with them sovereignty which is not my own. It is not mine to give," Duterte explained.

But in a statement during their 49th anniversary, the Central Committee of the CPP branded Duterte of being "obsessed with imposing a military and police approach to suppress the mounting clamor for fundamental social change amid the seething socio-economic problems besetting the Filipino people."

"He has totally reneged on his promised sweeping reforms and uplifting the lives of the impoverished masses," the CPP said.

It said that Duterte "has wilfully and maliciously followed the baton of the US imperialists who have long made use of including the CPP-NPA in its 'terror list' to further justify military intervention in the Philippines."

The US Department of State has tagged the CPP-NPA as terrorist organizations since 2002.

The CPP shrugged off the terror tag, saying it "is a futile attempt to discredit and attack the Filipino people’s revolutionary forces and their age-long aspiration for national freedom and social justice."

With the latest developments involving the leftist rebels, the Philippine government peace head refused to give any categorical statement regarding the prospects of the peace process in 2018.

"(It's) not good to speculate.. let’s wait for developments as they unfold," Presidential Adviser on the Peace Process Jesus Dureza told Manila Shimbun.

Asked if it is more advantageous to resume the peace talks or just continue with the military operations against the NPA, Dureza said, "(I) can't comment because I am the one managing both sides."

The CPP, on the other hand, is preparing for its 50th anniversary in 2018 by strengthening its forces and intensifying attacks against the Duterte administration.

"The NPA must intensify guerrilla warfare throughout the whole archipelago, launch tactical offensives against units of the AFP (Armed Forces of the Philippines), PNP (Philippine National Police) and attached paramilitaries, as well as punitive operations against the worst plunderers and corrupt officials, political and crime associates, and death squads of the Duterte regime," the communist group said.

"We must frustrate the plan of the US-Duterte regime to defeat the NPA before the end of 2018. It aims to do so by concentrating its attacks first in the guerrilla fronts in the eastern and other Mindanao regions and then on Luzon and Visayas," it added.

National Security Adviser Hermogenes Esperon Jr. has said there are around 3,800 leftist combatants nationwide and about 1,700 are in Mindanao where martial law has been further extended from Jan. 1 to Dec. 31, 2018 to finally quell rebellion.

Aside from the Islamic State-inspired terrorists, government officials have admitted that martial law extension aims to target also the NPA in southern Philippines.

Duterte has placed the whole of Mindanao under martial law since May 23 due to the attack of Maute terrorists in Marawi City. Despite liberation of Marawi from terrorists in October, the President sought congressional approval to futher extend martial law, which his allies in both the Senate and House of Representatives granted.