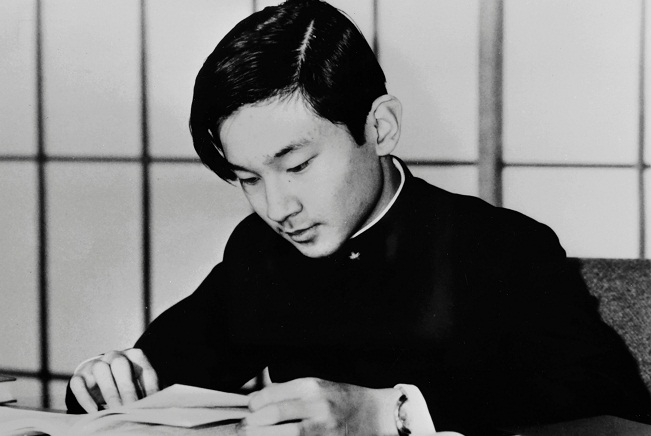 Tokyo--New Emperor Naruhito studied at the Department of History at Gakushuin University's Faculty of Letters, where he also enjoyed playing the viola and worked part-time.

At the university, then Prince Hiro took part in seminar groups researching Japan's early modern and medieval eras and started history studies in full when he was a sophomore.

The prince joined the music club at the university and played the viola, after being a violin player since kindergarten. During a new student welcoming party, he received a "harsh lesson" by being thrown into a pond.

He took lunch at the university's cafeteria, eating popular meals such as curried rice and "kitsune udon" noodles with deep-fried tofu, and enjoyed drinking with other students. He also worked part-time as a supervisor for university entrance exam takers.

On Feb. 23, 1980, while the prince was in university, a coming-of-age ceremony was held at the Imperial Palace. It was the first time that a grandson of the Emperor had come of age in the history of the Imperial Family.

His 141-page graduation dissertation was about transportation by water in the inland sea of Setouchi in the medieval era.

Shifting his focus to Europe's Middle Ages, he started research on water transportation from global viewpoints at the university's graduate school.

In June 1983, Prince Hiro departed for Britain for two years of study. After entering Merton College of the University of Oxford, he started living in a dormitory.

His study abroad was in keeping with the hopes of his parents. While researching the history of transportation on the Thames River, he washed his own clothes and did his own ironing. During his time in the dorm, he put up a poster of U.S. actress Brooke Shields in the room.

Going to pubs with his classmates, the prince enjoyed freedom that he could not experience in Japan.

After coming back to Japan in October 1985, he returned to Gakushuin University's graduate school. He was more active in his words and actions.

At a press conference in November 1985, he said that security in Japan was excessive compared with that in Britain.

Carrying a bouquet of roses, he visited a concert of Japanese pop singer Yoshie Kashiwabara in Tokyo's Shinjuku district.

He completed the master's course at Gakushuin University's Graduate School of Humanities in 1988.

In October 1987, the prince conducted his first official duty, on behalf of his grandfather, Emperor Hirohito, posthumously known as Emperor Showa, who was recuperating after intestinal surgery, and his parents, who were on a goodwill tour to the United States. Jiji Press