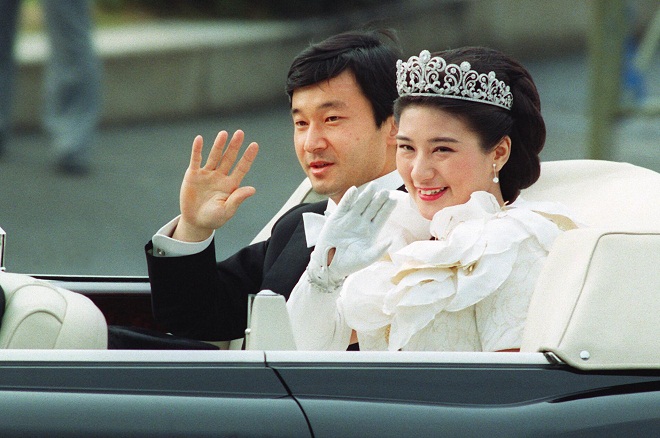 Tokyo, May 1 (Jiji Press)--The wedding parade of then Crown Prince Naruhito and Crown Princess Masako in 1993, celebrated with huge public enthusiasm, marked the beginning of a married life under intense public scrutiny, amid continuing pressure to produce an heir to the throne.

After the death of Emperor Hirohito, posthumously called Emperor Showa, in January 1989, then Crown Prince Naruhito moved to his own palace in February 1990.

In February 1991, the "Rittaishi-no-Rei" ceremony was held to proclaim for people at home and abroad that he officially took the title of Crown Prince.

The subject of then Crown Prince Naruhito's marriage had long been a focus of public attention. When asked by reporters about his ideal woman ahead of his coming-of-age ceremony, he suggested actress Keiko Takeshita.

He met Masako Owada for the first time in October 1986, at a welcome party for visiting Spanish Princess Elena held at the Togu Palace.

The future Empress was studying at the University of Tokyo, after graduating from Harvard University in 1985. After passing an entrance examination to become a diplomat, she left the university and joined the Foreign Ministry in 1987.

Once she entered the ministry, the future Imperial couple did not have a chance to meet again until August 1992, when they came together for the first time in about five years at the house of a former Foreign Ministry official, who served as their matchmaker.

Following several dates, including one at a duck-hunting facility owned by the Imperial Household Agency, in the city of Ichikawa, Chiba Prefecture, east of Tokyo, their informal engagement was approved at a meeting of the Imperial House Council in January 1993.

The future Princess Masako told a press conference that she had been moved by the then Crown Prince's words, "I will do my best to protect you for the rest of my life."

After "Nosai-no-Gi," a ceremony for the official engagement, in April, the wedding ceremony was held on June 9.

When the royal wedding parade was held in Tokyo, from the Imperial Palace to their palace in the Motoakasaka district, 190,000 people gathered on the streets to celebrate the union of the new Imperial couple.

A year after their marriage, they visited four Middle Eastern countries, including Saudi Arabia, on their first goodwill overseas visit.

When the Great Hanshin Earthquake, which measured the highest reading of 7 on the Japanese seismic intensity scale for the first time ever, took place in the western city of Kobe and its vicinity in January 1995, the couple shortened their scheduled trip to three Middle Eastern nations, including Kuwait, and visited affected areas twice, in February and March.

While swamped with official duties as Crown Princess, the future Empress was under heavy pressure to produce an heir. In December 2001, she gave birth to her eldest daughter, Princess Aiko, who is not eligible as a female to ascend the throne under the current rules of succession.

In December 2002, the couple visited New Zealand and Australia together, the first overseas visit they had made together in about eight years.

In May 2004, regarding the health of the then Crown Princess, who skipped a visit to Europe with her husband, then Crown Prince Naruhito told a press conference, "It is true that there were moves to negate Masako's career and personality."

The Imperial Household Agency announced that then Crown Prince Masako's illness was adjustment disorder. She still continues with her treatment, including taking medication.

In August 2006, the couple and Princess Aiko visited the Netherlands to rest. While there, they interacted with the Royal Family of the Netherlands, including Queen Beatrix. Jiji Press