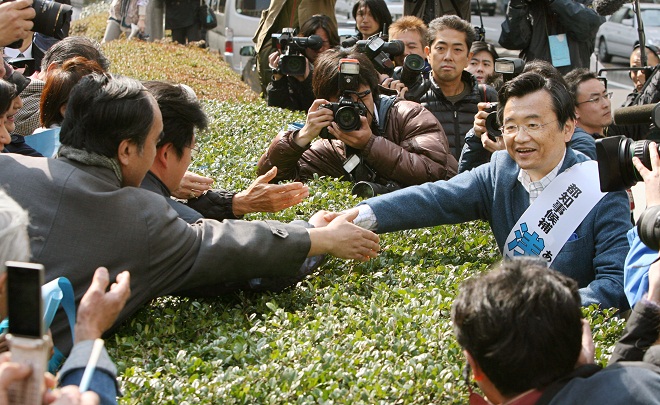 Tokyo- Shiro Asano, former governor of Miyagi Prefecture, said his biggest turning point in the Heisei era was ending his 23-year career as a health ministry bureaucrat to stand in the gubernatorial election in the northeastern prefecture in 1993.

Before deciding to run in the election, Asano did not have any political ambition as he found welfare service for the disabled his life-long work.

"The driving force behind the decision was anger that the major candidate in the election was the vice governor even after the former governor was arrested over corruption," Asano said in an interview.

"The week before I made the decision was mentally the toughest of my life," Asano added.

Asked what he remembers most in his days as governor, Asano cited his election campaigns, which he said was joined by citizens. He was reelected twice, staying in office for 12 years.

Elections are "pointless if the campaigns are carried out by political parties and pressure groups, with the citizens just there to vote," he said.

"I declined all recommendations offered by political parties and donations in the three elections and made it easier for Miyagi citizens to take part in the campaigns," Asano noted.

The former Miyagi governor never forgets the scandal of falsified spending for fictitious gatherings at the prefectural government, which came to light in his first term.

"I thought I had no right to sit in the governor's chair if I left this organizational misconduct unattended," Asano said.

Picturing many angry Miyagi people following the corruption of the former governor, he determined to take the initiative in investigating the wide-spread illicit practice at the government and disclosing all pieces of related information.

"I believe this rescued the organization (the Miyagi government) from the brink of death," Asano said. "It was a decision that could only be made by the top."

Asano, dubbed a reformist governor, also shone as a "fighting member" of the National Governors' Association.

Participating in meetings of heads of 47 prefectures in the country was "really fun," he recalls.

Heated discussions often lasted until late at night at a time when the administration of then Prime Minister Junichiro Koizumi moved to reduce local tax grants and give more fiscal autonomy to local governments, according to Asano.

Noting criticisms that the current association lacks vigor, he suggests the governors use their meetings as opportunities to share successful policy measures and "compete in governing well."

Asano raised an objection to the central government-led local vitalization projects, saying, "I see it contradictory to achieve revival of local economies in a centralized way."

"It's meaningless to implement projects only to receive grants from the central government," he stressed.

Local governments need to make actions on their own by capitalizing on their close relations with residents, he pointed out.

Asano developed adult T-cell leukemia in spring 2009 after he stepped down as governor.

"It was shocking" to learn that he was given a slim chance of survival, he said.

"But when I declared to my wife that I would fight the illness, I felt as ease because I was encouraged by my own words," Asano added.

After having a bone-marrow transplant, he left hospital in late 2010.

He now teaches local autonomy at a university. Jiji Press