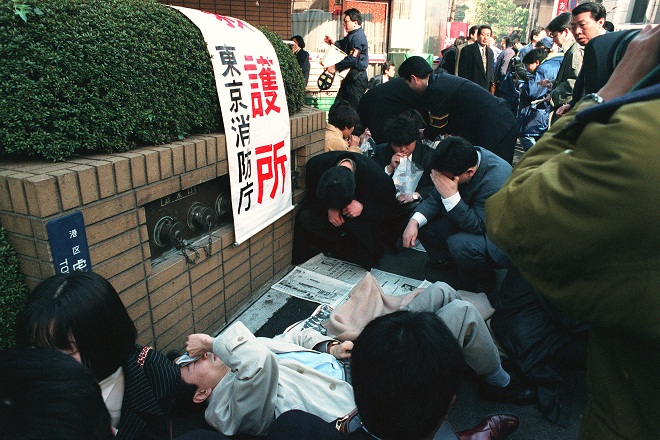 Lesson from Aum Crimes: People Can Be Easily Controlled

Tokyo- Freelance journalist Shoko Egawa says that a series of crimes by the Aum Shinrikyo doomsday cult in the 1980s and 1990s have left a lesson: People can be easily controlled psychologically.

In January this year, the last remaining one of all trials for the Aum-linked crimes was concluded. Their crimes cast a cloud over Japan in the early years of the Heisei era, including the 1989 murders of a lawyer and his family, the 1994 sarin gas attack in Matsumoto, Nagano Prefecture, and the 1995 deadly sarin gas attacks on the Tokyo subway system.

Egawa, 59, a long-time Aum watcher, said in an interview that she came to know about the cult in May 1989 after a parent of an Aum follower approached her for advice.

She introduced lawyer Tsutsumi Sakamoto to the parent, before Sakamoto went missing with his wife and their infant son in November that year. Aum members murdered them, and their bodies were discovered six years later.

"I started to keep track (of Aum) as a person almost directly involved," Egawa said.

The series of Aum crimes left 29 people dead and about 6,000 injured, with 192 indicted. Death sentences have become final for guru Chizuo Matsumoto, also known as Shoko Asahara, and 12 other former members.

Aum crimes can be understood better in the context of the mood of the times, Egawa explained.

"There was soil (that gave rise to Aum) from the Showa era," which ended in January 1989 upon the death of Emperor Hirohito and was followed by Heisei.

"Fears about the end of the century were growing" due to a 1970s smash-hit book about Nostradamus' prophecies that claimed the world would end in 1999, Egawa said. "Occult magazines were popular, and there was the bubble economy."

"Some people turned their back on a world where money counts and became interested in the spiritual world. Some of them picked up books by Matsumoto," she observed.

"In any period of time, young people look for something to live for and struggle as they try to find how they should live. Cults and their likes exist not only in Japan but also in any other society," Egawa said.

Egawa believes some Aum crimes might have been prevented if the police had acted swiftly and seriously on the murders of Sakamoto and his family.

"After the murders, one of the perpetrators, Kazuaki Okazaki, sent police a map showing the location where Sakamoto's son was buried. Six years later, the son's body was found at the very location," she said. Okazaki, whose surname has been changed to Miyamae, is among the 13 on death row.

Egawa also pointed to Masami Tsuchiya, a condemned convict who produced highly toxic nerve agents sarin and VX. "He renounced living in the secular world to live with other Aum members believing that the murders of Sakamoto and his family were not committed by Aum," she said.

"Without Tsuchiya, the sarin attacks in Matsumoto and on the Tokyo subway system wouldn't have happened. If the Sakamoto family case had been solved early, Aum would have disappeared at that point."

To absorb the lessons from the Aum crimes, it is important to pass on what happened to coming generations, Egawa said.

"Many things were left unclear in the trials, but many other things became clear," she said.

Egawa proposed that the records of the Aum trials be transferred to the National Archives of Japan as historical public documents, because under the current law, the records of criminal trials may be discarded after some periods.

"As long as the records are kept, future generations can study or report on them," she said.

Egawa said the Aum crimes showed that people can easily be controlled psychologically. This is "the most important lesson," she stressed.

"Even someone who studied physics as a graduate student of the University of Tokyo believed levitation by Matsumoto. We see what we want to see and believe what we want to believe," Egawa said.

Asked about the recent increase in fake news, Egawa said, "Even now, there are people whose psychological state is similar to that of the followers of religious cults."

"Despite all facts and evidence, such people believe what they want to believe and attack anyone who they think are enemies. Some people think that things must be one way or the other, no matter whether they are on the right or left politically," she said.

With the trials complete, the gallows are looming for the condemned Aum leaders.

"There is no reason not to execute Matsumoto," Egawa said.

But some of his condemned followers are remorseful about what they did and can communicate their experiences, Egawa said.

She believes that they can be useful in society if they stay alive.

Egawa said such people should be granted pardons and get their sentences reduced so that they can speak about what they went through, on the occasion of the planned transfer of the Chrysanthemum Throne next year. Jiji Press