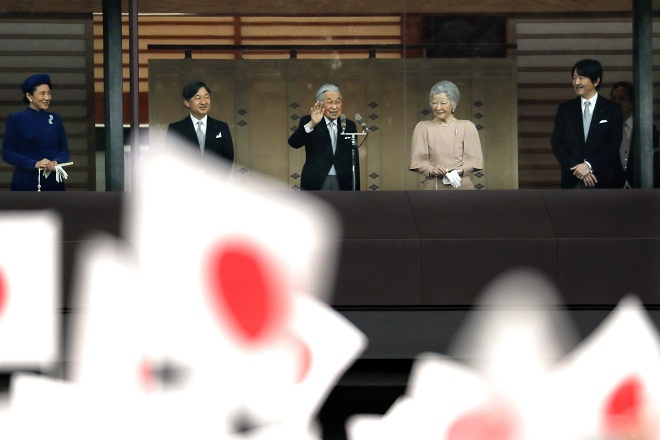 Tokyo- Tens of thousands of people visited the Imperial Palace to celebrate the 85th birthday of Emperor Akihito on Sunday, ahead of his abdication at the end of April next year.

Before the gate opening at the palace , A Crowd Of People Waited In A Long Line To See The Emperor In His Last Birthday Celebration Event With The General Public.

According To The Imperial Household Agency, Some 76,000 People Visited The Palace For The Morning Event.

"I wish you a bright new year, all happiness and good health," he told the people, "he told the people" are emperor said in a speech after mentioning number of severe natural disasters that hit Japan earlier this year. .

He also said he was happy seeing so many people coming to celebrate his birthday.

The Emperor showed up three times in the morning at a balcony of the Chowaden hall and waved to the crowd with smiles, together with Empress Michiko, Crown Prince Naruhito, who will succeed to the throne on May 1, 2019, his wife Princess Masako, Prince Akishino, the second son of the Emperor and Empress, and his wife Princess Kiko, as well as the Akishino couple's first daughter Princess Mako and second daughter Princess Kako.

This time, a large-screen video projector was set up at the event site so visitors could see well from a distance the Emperor, the Empress and the other members of the Imperial Family, an agency official said. Jiji Press