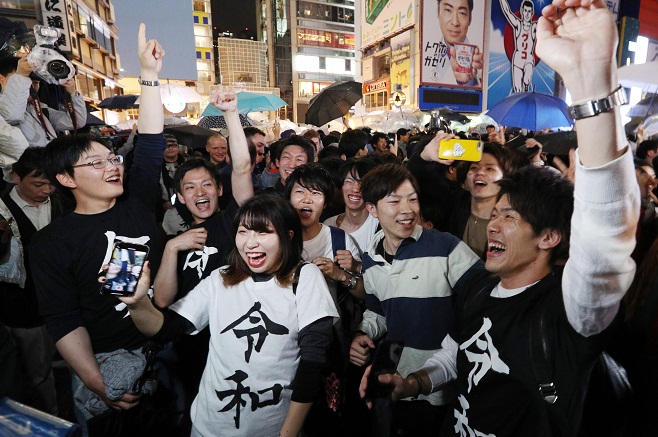 Tokyo--A number of people in Japan are feeling nostalgic about the Heisei era, which ends at midnight Tuesday (3 p.m. GMT) in line with the abdication of Emperor Akihito the same day.

Many gathered at the Imperial Palace in Tokyo's Chiyoda Ward in the rain and watched on their smartphones a live stream of the "Taiirei-Seiden-no-Gi" abdication ceremony, which was held at the palace from 5 p.m.

"I think Japanese people put their hearts together with a feeling of gratitude for Emperor Akihito and Empress Michiko," said Yuko Kase, 61, a farmer from the city of Asahi, Chiba Prefecture, east of Tokyo.

"It was fun living in the Heisei era," Niina Nakayama, 13, a junior high school second-grader in Utsunomiya, the capital of Tochigi Prefecture, eastern Japan, said. From Wednesday, when the new era, Reiwa, starts,

"I'll be a person who was born in an old era," Nakayama said with a laugh.

At Heisei Station on the Hohi Line of Kyushu Railway Co. <9142>, or JR Kyushu, people purchased platform tickets with the last date of the Heisei era and the name of the station printed on them, and took photos in front of the station signage.

Sadae Sako, 69, who came from the city of Kitakyushu in the southwestern prefecture of Fukuoka, said: "Both good and bad things happened during the Heisei era. I miss the era (as it ends)."

Yosuke Morita, a 35-year-old corporate worker in Tokyo, traveled to Heisei Station by rail from Showa Station on the Tsurumi Line of East Japan Railway Co. <9020>, or JR East. Showa is the same as the name of the era that preceded Heisei. "I'd been thinking how I should spend the last day of the Heisei era," Morita said. "I'm glad that I came here as it'll be a good memory."

Showa Station is in the city of Kawasaki, Kanagawa Prefecture, south of Tokyo.

The Henari district in the city of Seki, Gifu Prefecture, central Japan, drew great attention when the era changed from Showa to Heisei in January 1989, because its name uses the same two kanji characters as those for Heisei.

At a "michi no eki" roadside rest station near the district on Tuesday, 100 telephone cards carrying the two kanji characters went on sale. People formed a long line to get the product, which was first launched 30 years ago.

Ryunosuke Kondo, a 23-year-old corporate worker from the city of Komaki in the central prefecture of Aichi, was able to purchase the product after once being told it was sold out. "I hope that the luck continues into the first year of the Reiwa era," he said happily.

At Meiji Jingu, a Shinto shrine in Tokyo's Shibuya Ward, many people lined up to get a "goshuin" stamp with the last date of the Heisei era.

Chika Torigoe, 31, from Tokyo's Koto Ward, whose eldest son, Hirota, will turn one year old on Wednesday, smiled, saying, "I came here to pray for his healthy growth."

A 63-year-old self-employed man from the city of Koga, Ibaraki Prefecture, northeast of Tokyo, lined up for two hours to get the stamp. "I was able to spend the Heisei era peacefully. I hope my family will continue to live healthily in the Reiwa era," he said.

Kaoru Takimoto, 62, has been writing in and stamping visitors' seal books for 15 years at the shrine. "This was the busiest day. I could cry with joy," Takimoto said. Jiji Press