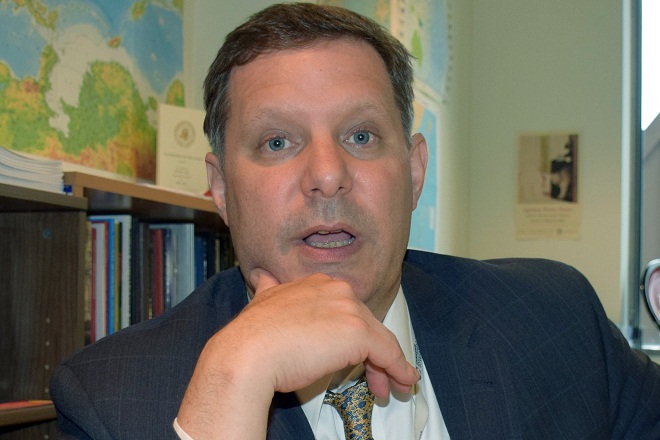 Washington- Japan and the United States may enter a "delicate time" depending on developments after the planned U.S.-North Korea summit on Tuesday, a U.S. expert has said.

The policy of imposing maximum pressure on North Korea "will stay the same" between Tokyo and Washington, even after President Donald Trump last week said he no longer wants to use the term maximum pressure, according to James Schoff, senior fellow at the Carnegie Endowment for International Peace.

But Trump may "offer some kind of economic incentive for North Korea" during the upcoming meeting, if the Asian country makes a bold move on denuclearization, Schoff said in a recent interview.

Trump is set to meet with North Korean leader Kim Jong Un in Singapore on Tuesday for what would be the first summit between the two countries.

The United States is unlikely to lift sanctions but may grant exemptions or take steps to allow special economic projects to happen, according to Schoff.

"This idea of economic projects as an incentive for denuclearization could further enrich the Kim regime in some ways," Schoff said. "So that's something we have to keep a close eye on."

"Abe is not so optimistic" about Kim's intentions, while Trump "thinks maybe he could end the Korean War," said the expert on Asian affairs.

If the war is ended, China and Russia would say that the U.N. command in South Korea is no longer necessary, while the South Korean public may question the need to keep U.S. troops in their country, Schoff said.

"So you could see the U.S. forces in Korea change or become smaller as a result of declaring an end to the war, even though the real security situation has not changed fundamentally," he continued.

"That's going to create tension between Abe and Trump," Schoff said. "So it's really a delicate time for alliance discussions."

Because of Abe's hard-line approach toward North Korea, there is a danger that Trump may regard Abe as "a hindrance," but "Abe will be careful," Schoff said.

If Abe and others skeptical of Kim are correct, "then sooner or later Kim Jong Un will mess it up himself" by refusing to do what he promised, Schoff predicted.

"Abe can kind of wait for Kim to upset Trump or disappoint Trump," he said, adding that Abe should be careful not to become a "party pooper" in the current mood for dialogue.

On the issue of North Korea's abductions of Japanese citizens, Schoff said Trump will mention it during his summit with Kim but the issue is unlikely to become a main agenda item.

If Kim is "really interested and willing" on denuclearization for political and economic normalization, which does not look realistic, that would open up opportunities for a meeting between Abe and Kim, Schoff said. Jiji Press