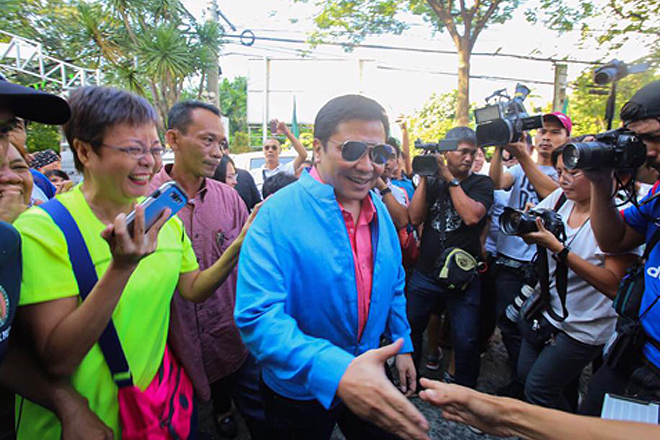 The Sandiganbayan anti-graft court has allowed former Senator Jinggoy Estrada, who is charged for supposedly non-bailable offense, to post bail on grounds that the evidence against him was not strong and he is not a flight risk.

In a vote of 3-2, the 22-page decision of the Special Fifth Division of the anti-graft court on Sept. 15, 2017, however, rejected Estrada's motion to dismiss the plunder case for lack of merit.

"Although there is evidence to show that there were glaring irregularities in the disbursement of accused Estrada's PDAF (Priority Development Assistance Fund) allocations and that he received a sum of money from his participation in these irregularities, there is no strong evidence to show that he is a main plunderer within the contemplation of the plunder law and as alleged in the Information. Thus, his admission to bail is in order," the Resolution read.

It also said that Estrada is not a flight risk.

"It has thus been ruled that the main purpose of bail is to ensure the appearance of the accused during the trial. In the present case, considering that the accused was a public officer, a former Senator of the Philippines and a prominent personality, with close family ties in the country, the probability of flight is not that much," it said.

The Sandiganbayan also said the fact that the former senator surrendered himself voluntarily to the authorities and remained in detention for almost three years "now also negate the intention or inclination to evade the legal processes."

In filing his motion to dismiss the case and to grant him bail, Estrada cited the Supreme Court's decision dismissing the plunder case of former President Gloria Macapagal-Arroyo in July 2016 and became final in April 2017.

Citing the high court's ruling, the Sandiganbayan said the law requires in the criminal charge for plunder against several individuals that there must be a "main plunderer and her conspirators, who may be members of her family, relatives by affinity or consanguinity, business associates, subordinates or other persons."

In the same decision, it said implied conspiracy could also identify the main plunderer, "but that fact must be properly alleged and duly proven by the Prosecution."

The prosecution, on the other hand, explained that in a plunder case, there is no need to accuse who is the main plunderer because the crime of plunder "is a collective act undertaken by conspiring participants, so there is no main plunderer to speak of."

The prosecution also averred that on the assertion of Estrada that he was not a flight risk, the Sandiganbayan should not consider it as it takes relevance only in cases of discretionary grants of bail.

The recent Sandiganbayan ruling was a reversal of the final resolution of of the same court, denying Estrada's petition for bail due to the existence of evidence of strong guilt of the charge filed against him.

"The accused's present motion case law which did not yet exist and therefor could not have been considered in the resolution of the accused-movant's earlier petition for bail. It is also for this reason that the present motion cannot be construed as having violated the omnibus motion rule. As the previous resolution denying bail predates the Arroyo case, the rulings in the latter case could not have been raised and considered when the bail petitions were resolved," it explained.

Meanwhile, the Sandiganbayan said it dismissed the petition for the dismissal of the case as the prosecution has yet to terminate its presentation of evidence.

"Thus, it would be premature to rule on any sufficiency of evidence to sustain a conviction," it said.

Estrada was allowed to post P1 million bail for his plunder case and P330,000 for 11 counts of graft.

The former senator, who is a son of convicted plunderer former President Joseph Estrada, now mayor of Manila, was detained for over three years at the Philippine National Police Custodial Center for allegedly receiving P183 million kickbacks from his PDAF or pork barrel. Celerina Monte/DMS