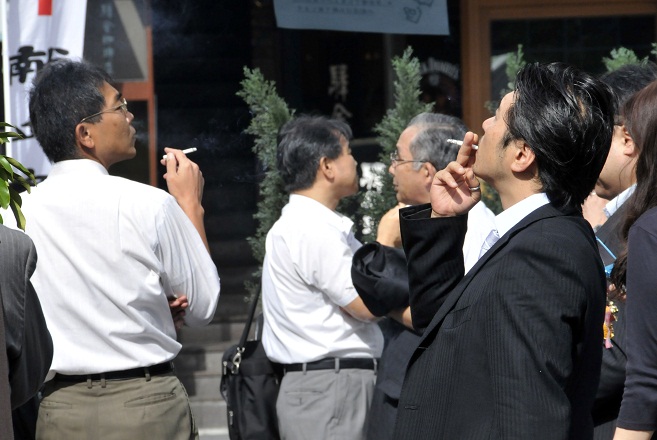 Tokyo--The proportion of smokers is dropping in Japan, with the figure in 2018 down by half from the 36 pct level when the current Heisei era began in 1989.

Antismoking movements are viewed as one cause of the drop. According to Fumisato Watanabe, head of a center for information on tobacco issues, there were no smoking regulations at almost all public and transportation facilities when he started a movement for nonsmokers' rights some 40 years ago.

The revised health promotion law, enacted in July 2018, prohibits smoking in principle at facilities that many people use, such as offices and restaurants. Under the law, violators will be punished. Smoking restrictions covering all buildings of schools, hospitals and government bodies will be implemented in July this year.

Ordinances with tougher regulations on smoking have also been established to prevent passive smoking in municipalities including Tokyo and the city of Chiba.

Watanabe, 81, said that the movement for nonsmokers' rights began with the wish to prevent passive smoking. "It was good that the law was revised and ordinances were established, although they are still weak," Watanabe said.

Smokers also saw tobacco prices increase. In 1989, the price of JT's mainstay Mild Seven, the predecessor of Mevius, stood at 220 yen per pack, but recently the cost increased to 480 yen due chiefly to tax hikes.

Meanwhile, major cigarette makers are currently focusing on sales of heat-not-burn tobacco products. An official of JT said that such products smell less and are considered to have lower health risks. The products are gradually spreading, but it is uncertain whether cigarette makers will be able to attract new customers. Jiji Press