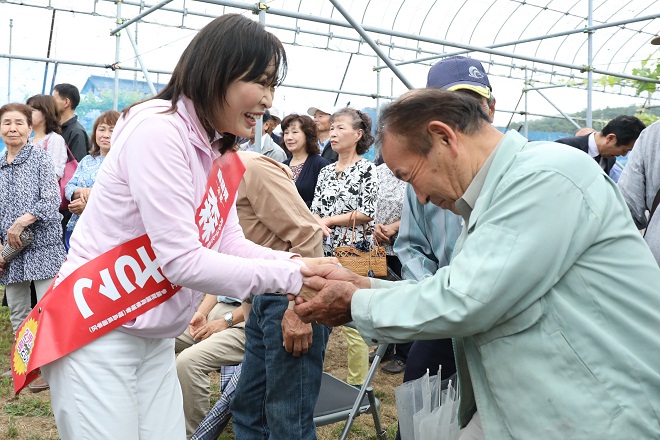 Fukushima- Rival candidates, both women, from the ruling Liberal Democratic Party and the opposition camp for the upcoming House of Councillors election in Fukushima Prefecture are campaigning on platforms to eliminate nuclear power from the northeastern prefecture.

But their calls are in conflict with the national energy policy of the LDP and the positions of some opposition supporters.

With campaigning in the single-seat prefectural constituency shaping up effectively as a one-on-one race, local voters who were affected by the March 2011 nuclear accident are casting a cynical eye at the race for the July 21 election.

"I'm determined to push ahead with reconstruction following your requests steadily," Masako Mori, the LDP's candidate for Fukushima, said on July 4, the opening day of the official campaign period, at a fruit farm in the capital city of Fukushima.

"I'll do my best to achieve the goal of decommissioning all nuclear reactors in the prefecture," said Mori, 54, vice chair of the LDP's Headquarters for Accelerating Reconstruction after the Great East Japan Earthquake.

Prime Minister Shinzo Abe, also president of the LDP, gave a speech in support of Mori.

Reflecting local voter concerns over nuclear power, the LDP's Fukushima prefectural chapter, in a Fukushima compilation of party policies, has set goals of scrapping all reactors in the prefecture and building up knowledge and expertise related to decommissioning.

In contrast to the prefectural chapter's position, however, the Abe government's basic energy program regards nuclear power as an important base load electric power source, while the LDP's policy pledges for the Upper House election include efforts to reactivate nuclear reactors.

The LDP suffered losses in recent national elections in Fukushima Prefecture, home to Tokyo Electric Power Company Holdings Inc.'s <9501> Fukushima No. 1 plant, the site of the nation's worst-ever nuclear accident, after the March 2011 earthquake and tsunami.

In the 2017 House of Representatives election, an LDP candidate was defeated in Fukushima's No. 1 constituency, which includes the prefectural capital. In the 2016 triennial Upper House poll, an incumbent cabinet minister failed to be re-elected.

In their campaign speeches, both Abe and Mori admitted she is facing a tough race.

A lawmaker elected from the prefecture said, "Residents in Fukushima have pent-up emotions toward the LDP."

Mori received party endorsement as a candidate in August last year, after failing to pass the first round of screenings a month earlier. Explaining the deferred approval, one party source suggested that she was ill at ease with local party members including prefectural assembly members.

She has been helped by delays in the opposition camp's selection of a candidate, but frustration is smoldering among her supporters, with one city assembly member grumbling that "she does not know how to greet you properly."

Mori's key opponent in the three-way race is Sachiko Mizuno, 57, who is running as the opposition camp's unified candidate.

On June 30, standing in drizzle in front of a department store in the city of Fukushima, Mizuno told a thin crowd, "Reconstruction of Fukushima is still half done."

Referring to the LDP's policy pledge, she said the government "has not presented at all a road map for decommissioning all reactors (in the prefecture)."

The candidacy of Mizuno was decided in April by a five-party forum consisting of the prefectural chapters of the Constitutional Democratic Party of Japan, the Democratic Party for the People and the Social Democratic Party, as well as unaffiliated lawmakers elected from Fukushima and the Fukushima chapter of the Japanese Trade Union Confederation, or Rengo Fukushima.

After the Japanese Communist Party withdrew its candidate and decided to back Mizuno, she became the unified candidate of the opposition camp.

With Mizuno calling for a society free of nuclear power, the focus of confrontation with the LDP is blurred. "It's difficult to differentiate ourselves (from the LDP) in the prefecture," a senior official of Mizuno's campaign office said.

Within her camp, there are gaps in enthusiasm regarding the policy of seeking the elimination of nuclear power.

Mizuno has concluded five-point policy agreements, including on nuclear policy, with members of the five-party forum, but Rengo Fukushima, which has under its wing the Federation of Electric Power Related Industry Worker's Unions of Japan, opted out, in consideration for union members who work for electric power and electrical engineering companies.

Still, Rengo Fukushima issued a recommendation for Mizuno after concluding from her policies as a whole that there was no other candidate it could support.

But an official of Rengo Fukushima said, "Cheering for her in street speeches and hearing her emphasis on getting rid of nuclear power leave me confused about my feelings."

After the triple meltdown accident, the Japanese government issued an evacuation advisory to 11 municipalities around the stricken nuclear plant in Fukushima. Since the advisory was lifted in the eastern part of the city of Tamura in April 2014, the size of the exclusion zone has been reduced in stages.

But the advisory remains in place in the town of Futaba, as well as in parts of six municipalities, including the towns of Okuma and Namie. More than 30,000 people still live as evacuees outside the prefecture.

"The evacuation advisory has been removed, but I can't return home," said a woman in her 60s who lives in the city of Fukushima in public housing designed to help reconstruction. "Only a few people have returned home, and I can't live in my home town as most of the residents are elderly people."

She had her house in Namie demolished as she had no prospects of returning.

In Namie, more than two years after the evacuation advisory was lifted for most of the town in March 2017, only a little more than 1,000 people have returned. Of people who are still registered as residents of areas for which the advisory was removed, only some 7 pct have returned home.

On the Upper House election campaigns, the woman in public housing said in a weary voice, "Regardless of whoever wins, probably nothing will change in our situation." Jiji Press