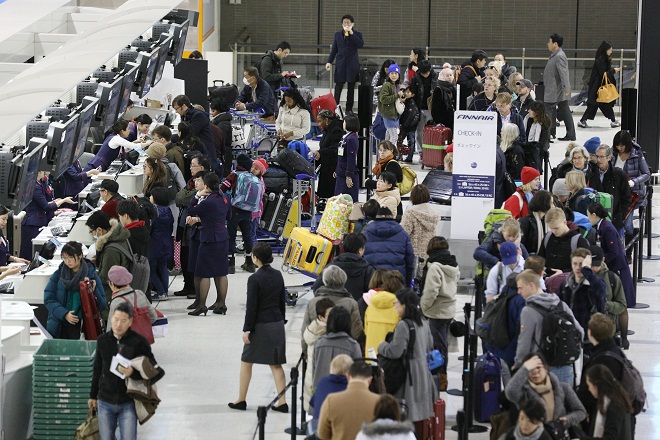 Flyers to, from Narita each top 60,000 per day in Golden Week

Tokyo--The numbers of users flying in and out of Japan through Narita International Airport near Tokyo each surpassed 60,000 per day on their respective peak days during the 10-day Golden Week holiday period, a government bureau announced Monday.

It was the first time for both daily records to top 60,000 in the airport's 40-year history.

A total of 1,090,170 passengers used the airport to enter or exit the country during the holiday period between April 26 and May 6, a 13.9 pct increase over the same period last year. While the number of Japanese users increased by 36.7 pct, that of foreigners dropped by 6.5 pct due to difficulties securing flight reservations, sources said.

The top destinations for users leaving Japan from Narita were, in descending order, the United States including Hawaii and Guam, mainland China, South Korea, Taiwan and Hong Kong. Jiji Press