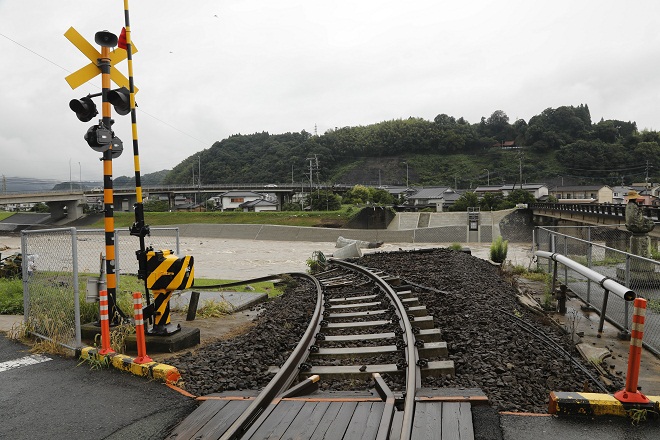 EXCLUSIVE: Over 70 Pct of Dangerous Railroad Crossings Untouched in Japan

Tokyo- Over 70 pct of underequipped railroad crossings in Japan where accidents resulting in deaths or injuries occurred in the five years through fiscal 2016 have yet to be abolished or see any improvement as of the end of last month, Jiji Press learned Saturday.

According to railway operators and municipalities, no relief measure was implemented for 59 of 79 "Class 4" crossings, which are equipped with crossbuck signs but do not have crossing gates or alarms and saw casualties in the five years through March 2017.

Due to high accident risks, the transport ministry has called for Class 4 crossings to be scrapped or upgraded to Class One, equipped with automated crossing gates and alarms.

Some railway operators attribute the slow response to huge costs for improvement work and difficulty in winning local residents' agreements to abolition.

A total of 84 accidents occurred at the 79 Class 4 crossings during fiscal 2012-2016, leaving 38 people dead and 67 injured, according to railway accident records obtained from the ministry through a freedom-of-information request by Jiji Press.

Of the 79 crossings, 20 have been abolished or upgraded to Class One, according to railway operators.

West Japan Railway Co., or JR West, plans to upgrade the Class 4 crossings of Asahi Jinja and Tsutsuminouchi on the Kishin Line in Maniwa in the western prefecture of Okayama and on the Geibi Line in the western city of Hiroshima, respectively, to Class One crossings in fiscal 2018, which ends in March next year, it said.

According to Kanto Railway and Shikoku Railway, or JR Shikoku, Kitataiho 8 has been upgraded to Class One, while Matsuchi Daiichi has been abolished.

But Nagano Electric Railway, Uedadentetsu, Echizen Railway said they have discussed scrapping the crossings where accidents took place but have yet to win the agreements of local residents and other users.

In many cases, railway operators set up signs banning vehicles from entering Class 4 crossings that have experienced accidents or they started talks with local municipalities in an attempt to abolish them.

But it takes time to obtain local consent. Also, an official of Nagano Electric Railway said it is difficult for a single railway operator to upgrade a railway crossing from a management standpoint, and this view is shared by other small railway operators.

Meanwhile, there were a total of 1,516 Class 4 crossings on the railway lines operated by the seven Japan Railways Group firms as of the end of March 2017, accounting for 54 pct of all such crossings in Japan, according to the ministry.

For the five years through fiscal 2016, the number of accidents that caused causalities stood at 12 in areas covered by JR West and nine each in areas under the jurisdiction of JR East and JR Kyushu.

Of the crossings where such accidents occurred, JR West abolished two and upgraded five, while JR East scrapped and upgraded two each. Jiji Press