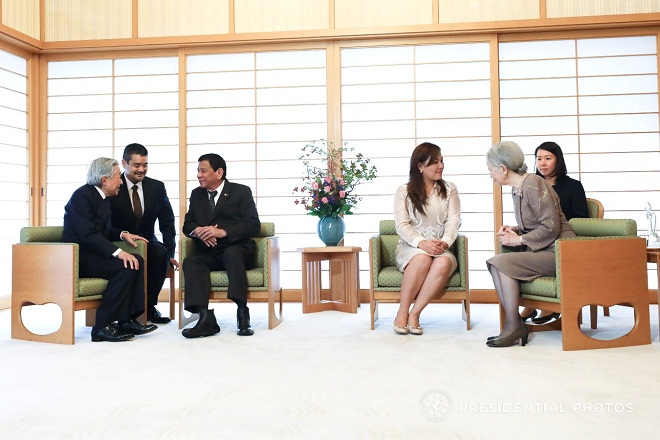 President Rodrigo Duterte said on Tuesday he was happy to meet with Emperor Akihito of Japan.

Duterte, accompanied by partner Cielito "Honeylet" Avanceña, had an audience with the Emperor and Empress Michiko before returning to the Philippines following his two-day visit to Tokyo.

In a video posted on Facebook account of the Presidential Communucations Operations Office, Duterte told the Emperor that he was "very happy."

Before he left for Japan on Sunday night, Duterte promised to behave well in front of the Emperor.

"I supposed I have to limit my mouth there, except maybe to bring warm greetings of the Filipino nation, a grateful nation to Japan, as a matter of fact," Duterte had said.

He added earlier  that he would take the occasion to personally convey gratitude for Japan's friendship with the Philippines, "which has grown stronger under His Majesty's reign."

He had said his audience with the Emperor was "kind of a homage" to him before he abdicates.

This was Duterte's first meeting with the Emperor. He was supposed to have an audience with the Emperor during his first visit last year in Japan. But it did not push through due to the death of his Majesty’s uncle, Prince Mikasa. Celerina Monte/DMS