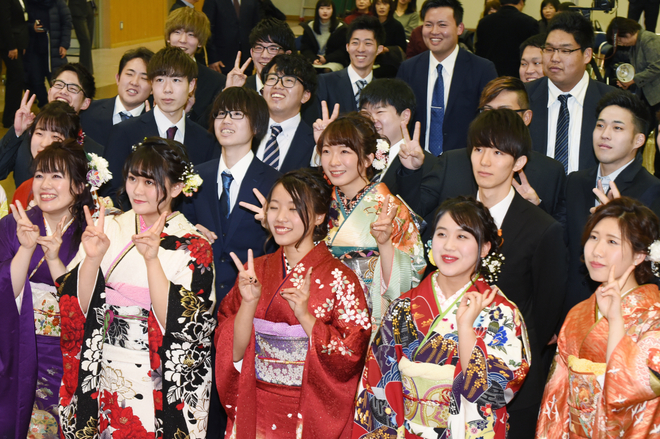 Tokyo--Coming-of-Age ceremonies were held in many places across Japan on Sunday, including areas devastated by natural disasters last year.

In the town of Saka in Hiroshima Prefecture, western Japan, a minute of silence was observed before a Coming-of-Age ceremony in memory of the victims of floods caused by torrential rain in July.

Naoya Nishitani, 20, chairman of the ceremony planning committee, called for the minute of silence. His home was severely damaged by the floods.

He said he accepted a request to assume the committee's chair "to return the help I received from my former classmates and the Saka town government during the disaster."

"I myself faced hardships, but we were able to overcome difficulties together. This gives me confidence for the rest of my life," Nishitani said.

At a Coming-of-Age ceremony in the city of Kurashiki in neighboring Okayama Prefecture, where wide areas were flooded during the rain, Mayor Kaori Ito said many people came to the ceremony from heavily affected areas, expressing her heartfelt sympathy.

"I hope that you will vigorously push forward toward your goals,"

Ito said of new adults, especially those affected by the disaster.

Ayaka Shidahara, a 19-year-old from the heavily hit Kurashiki district of Mabicho, who lives in temporary housing, said: "The light is gradually coming back to the town. Supported by this, I'll work hard."

A total of 26 new adults attended a Coming-of-Age ceremony in the town of Atsuma in the northern prefecture of Hokkaido, which was struck by a massive earthquake in September.

In a speech, Hikaru Asano, 20, said, "We'll pass down the memories of the disaster into the future while praying for a decrease in the number of people having hardships."

Koji Yamada, 20, whose family business has about 70 cows, is set to graduate from an agriculture school this spring.

"I want to be a good farmer," he said. Jiji Press