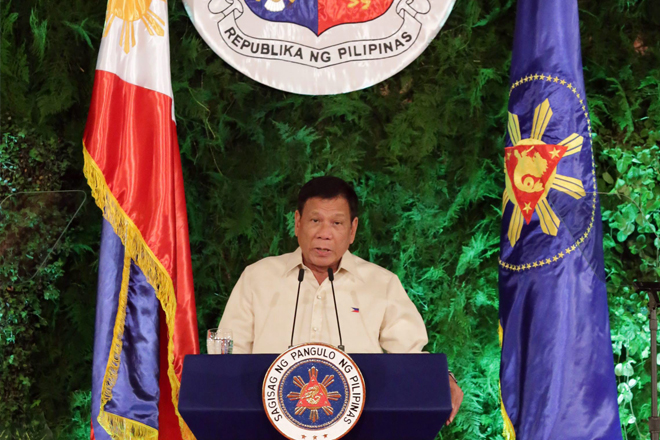 President Rodrigo Duterte has described his first year in office as a "roller coaster" ride which should be assessed only after the end of his term.

The 72-year old Duterte assumed office as the 16th President of the Philippines during high noon of June 30 a year ago, replacing Benigno Aquino III.

He is the first president who came from the conflict-island of Mindanao and devoted over two decades of his life as mayor of Davao City before assuming the highest position in the land. He was an assistant city prosecutor in Davao. .

Duterte has been criticized for having a colorful vocabulary and he was even told to act like a "statesman."

But in many occasions, Duterte declared, "I am not a statesman.

"You must be a statesman because you are already the President of a Republic," Duterte has recalled in one of his speeches of what was told to him.

But he has stressed, "Well, I’m sad to say that I never really graduated from my traditional behavior, deportment and maybe my paradigm about what a public office should be."

Duterte has been criticized for changing his statements, sending wrong signals, particularly to the international community.

But he admitted in a speech during the 115th anniversary of the Bureau of Customs on February 8, that out of five statements that he made, "only two were true, the other three, they were all jokes.

"And so I'm so fond of doing it. I just want to laugh. Well, at the expense also of myself sometimes, (other) people."

But from all of his pronouncements, Duterte has vowed to work hard for his "three fundamental promises" - stop corruption, addressing criminality in the streets, and suppressing illegal drugs.

If I get to live, then I'll tell you. If I don't exist anymore by that time, you make your own assessment," he said. But he reminded, "just be fair."

Like Duterte, for some analysts, they said in a recent forum in Quezon City that it is hard to make an assessment of the first year of the current administration.

However, some noted a significant positive impact of Duterte being the president.

Aileen Baviera, professor of the Asian Center-University of the Philippines, hailed Duterte's independent foreign policy, which according to her "clearly created an impact" on his first year in office.

She said the Philippines became "strategic" once more in the eyes of other countries.

Duterte openly slammed former President Barack Obama and the US State Department for criticizing his bloody war on illegal drugs and he even declared his decision to distance from the US when he was in his state visit to China in October last year.

The president also castigated the European Union and then United Nations Secretary General Ban Ki-moon when they raised concern on the increasing number of alleged extrajudicial killings of drug suspects in the country.

Duterte made an effort to visit non-traditional allied countries to forge closer ties with them, such as Russia. From having a strained relationship with China due to the territorial dispute in the South China Sea, Duterte renewed the Philippine’s friendship with Beijing by deciding to put momentarily on the back burner the issue, particularly the decision of the 2016 UN Arbitral Tribunal rejecting China's "historic claim" in almost whole of the South China Sea.

Malacanang admitted Duterte is the "most traveled" president during the first year of administration as he visited 21 countries.

Baviera said in terms of the impact of Duterte's foreign policy, it's high, but in terms of outcome, "during the first year, you can never tell yet the result." Like in the case of China, she said most of its pledges of assistance remain pledges.

If there is "disappointment" in the first year of the Duterte government, she said it is the continued "polarization" of the people.

She said the government should act to unify the country, including those critical of Duterte.

Ramon Casiple, executive director of the Institute for Political and Electoral Reform, said while there could be no "concluding programs or projects yet,", but "he's (Duterte) on the right track."

He also cited the change in the government's foreign policy, which gives positive results, such as "in terms of new money coming in, the friendship with other countries, unfreezing of the relationship with China."

Casiple said the people are looking forward to the new tax reform and its possible impact, and on the political reform, such as the passage of a new Bangsamoro Basic Law.

The Duterte administration has been pushing for the passage in Congress of the Comprehensive Tax Reform Program, which according to the Department of Finance, would make the country's tax system  simpler, fairer and more effective, especially for low- and middle-income taxpayers, and would raise enough money to bankroll the government’s ambitious public investment strategy to sustain the growth momentum and attain economic inclusion.

The government will also seek for the congressional approval of the BBL, which is part of the peace agreement with the rebel Moro Islamic Liberation Front.

Sergio Ortiz-Luis, honorary chairman of the Employers Confederation of the Philippines, shrugged off the criticisms against Duterte, particularly on how he speaks or what he says.

Coming from the business sector, he said, "irregardless of how he (Duterte) behaves," the president could provide what their sector wants, such as foreign direct investments.

Ronald Mendoza, dean of the Ateneo School of Government, said if there is one sector, which he would give high score on Duterte's first year in office, it would be the effort to fix the National Food Authority.

But Mendoza said he would give Duterte a low score in his anti-drug campaign, "uncertainty" of the public-private partnership program and in foreign policy.

He raised concern that with the seeming bias now of the government to official development assistance or the government-to-government transactions in financing huge projects, this could result to corruption.

"Like infra, there is a tendency to go away from PPP and go for heavily government financed transactions. This is potentially a concern. A reason why we shifted to PPPs is to deal away with financing overrated infrastructure. Now shift back to government is concerning a lot of people, especially in private sector," he said.

As to the foreign policy, he wants the Duterte administration to "clearly signal" to China that it is not giving up or weakening its claim in the South China Sea.

"So in my view, a benefit cost analysis of the relationship with China (should be made), what they are giving up is very small compared to what potentially we are giving up. So we have to be careful that we are not giving that up. So, whatever they give us, let us disconnect the economic relationship with our claims," he explained, citing the untapped natural resources in the Reed Bank in the South China Sea.

"Our claims will not be touched, it will not be weakened, whatever we do on the economic side, trade, investment. Let's just signal always that these will not be touched. This is for our future generation, maybe a stronger generation because they will have a more powerful economy behind them. They will assert it. Let's not weaken it, otherwise, we have gotten something (from China) but we will also largely lose something," Mendoza stressed.

"The punitive approach would not work," he said, citing the experience of Thailand and Portugal which both changed their strategy. He also said the "jails would only be filled" with detainees, including those young ones who are not really addicted to illegal drugs and "in turn creates more criminals."

"There should be no culture of impunity," he said.

Of the total incidents, 2,098 were considered to be drug-related, while 2,535 were said to be non-drug related, such as heated arguments, personal grudge, love triangle and others.

A huge number or 8,200 were incidents "with motive to be determined."

Of the total incidents, 3,194 were classified as murder cases and 970 as homicide cases, both cleared or filed in court. On the other hand, 8,669 homicide cases were not yet cleared.

Casiple considered the administration's campaign against narcotics of having "high support" and "great impact on the ground."

On May 23, while he was in a visit to Russia, he placed the whole of Mindanao under martial rule for 60 days due to the "rebellion and invasion" of the Islamic State-inspired Maute Terror Group in Marawi City.

The president even warned that he might expand the martial law coverage to Visayas and Luzon if the terrorists reach the other two major islands of the country.

"It sets a wrong signal to prolong and increase the scope of martial law," he said, citing the possible negative perception it might create to the tourists, investors and the rest of the world.

"There are missteps that the government and the military is doing that do not need martial law actually," he added.

Baviera said she did not also see any justification to extend martial law, while Casiple expressed belief the problem in Marawi would be finished soon.

As of June 28, the government said the number of casualties in Marawi reached 422 - 44 civilians, 75 government troopers, and 303 terrorists.

Duterte has said his government has earmarked at least P20 billion for the reconstruction and rehabilitation of the war-torn Marawi City. He vowed to rebuild the city and make it prosperous again. Celerina Monte/DMS