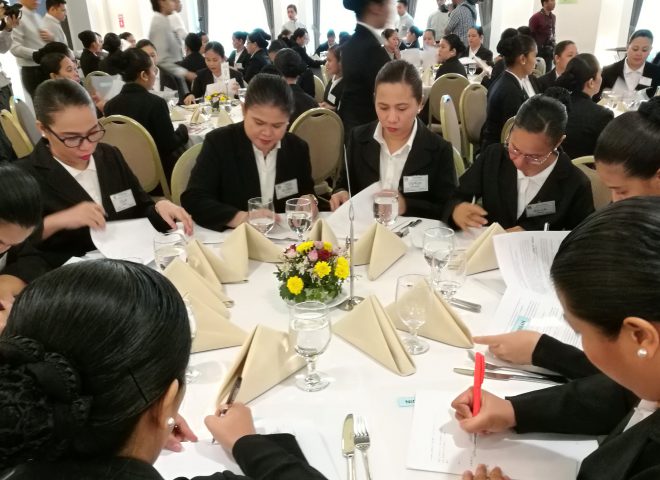 370 Filipino professional housekeepers to be deployed to Japan

The Philippines is set to deploy more professional housekeepers to Japan this year.

The 370 professional housekeepers to be sent to Tokyo, Kanagawa and Osaka signed on Monday contract with Japanese housekeeping support service firm Nichii Gakkan in a ceremony in Manila.

But this will be the first time that Magsaysay Global will deploy a big number of houseworkers.

The deployment of professional housekeepers from the Philippines in under the "Project to Accept Foreigners Conducting Housekeeping Services in National Strategic Special Zones" of Prime Minister Shinzo Abe's government.

Marlon Rono, president of Magsaysay People, urged the Filipino housekeepers to be deployed to Japan to do their best since the program is still on its "pilot" stage.

"I hope that you'll do a really good job of bringing the Philippine flag to Japan...be the model, be the ambassador," he said.

He told the housekeepers that the project will continue depending on their performance.

The Filipino housekeepers have a three-year contract and they are expected to earn a net of P45,000 to P55,000 monthly salary, said Jay Fernando, Magsaysay Global general manager.

As professional housekeepers, they have to work for eight hours a day from Monday to Friday.

Unlike other Filipino household workers abroad, the housekeepers in Japan are not staying in the house of their employers.

Most of the 370 household workers to be sent to Japan previously worked in the Middle East, including Kuwait.

Mae Anne Rivera, 31, said she expects better working environment, as well as on her salary when she goes to Japan.

Rivera, single, worked as a domestic helper for a Royal family in Kuwait for two years until December 2016.

She learned about the housekeeping job in Japan when she was still in Kuwait through the social media.

Shortly after she returned to Cagayan de Oro from the Gulf state, she applied to Magsaysay Global. After months of waiting, Rivera said she received a call from Magsaysay Global in September last year informing her that she was on the shortlist and she would undergo training.

Rivera, a graduate of hotel and restaurant management, said she is excited to see "Sakura" when she works in Japan.

Maria Eureka Theresa Lotilla from Sultan Kudarat expressed belief that she would not find a hard time to work in Japan.

Contrary to what she has been hearing from workers in other parts of the world, the 34-year old single mother said she feels "really safe" to work in Japan.

Lotilla, a BS Math graduate, said this will be her first time to work abroad.

Even if she has yet to go to Japan, she said, "it's as if I already love it," adding that she is excited to see also "Sakura and the beautiful buildings."

Rivera and Lotilla will be deployed to Osaka. Celerina Monte/DMS