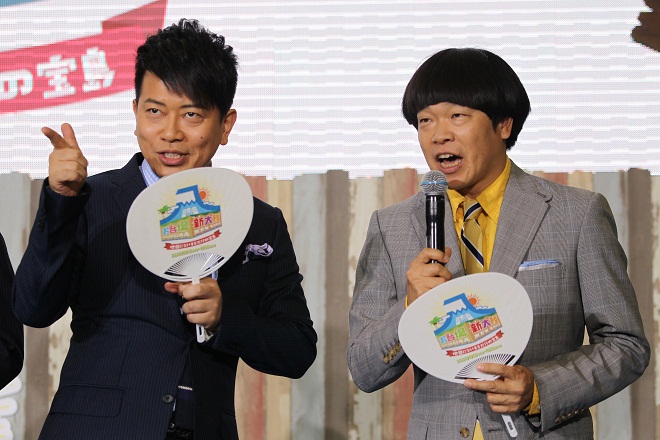 Unstable incomes behind “underground business” of comedians in Japan

Tokyo--Despite mounting criticism over recently revealed "underground performances" by some comedians in Japan for antisocial groups, quitting such operations appears difficult as they are important sources of incomes for such entertainers, many of whom are apparently not earning enough money from activities through their talent agencies, pundits say.


Major entertainment company Yoshimoto Kogyo Co. said on June 24 that it has suspended some of its comedians for the time being after they were found to have attended an event arranged by an antisocial group and received money from it.


Underground performances refer to operations in which comedians receive money in return for activities they conduct without the involvement of their management agencies.


The scandals should be utilized as an opportunity to consider ways to deal with antisocial groups, instead of simply criticizing comedians involved, an expert said.


The scandals came to light as a weekly magazine recently reported that Hiroyuki Miyasako, 49, a member of popular comedy duo Ameagari Kesshitai, and others who belong to Yoshimoto Kogyo participated in an event hosted by a fraud group about five years ago.


On June 4, the company fired Shinya Irie, 42, a member of another comedy duo, Karateka, who is believed to have invited the Yoshimoto Kogyo comedians involved to attend the event.


The company announced on June 27 that it has suspended two other comedians indefinitely as they received money for performing at a birthday party for a restaurant owner about three years ago that was apparently attended by antisocial group members.


Some 6,000 comedians belong to Yoshimoto Kogyo, according to the company.


Most of them appear to face difficulties living only on income from jobs through the company, such as television appearances, sources familiar with the situation said.


Underground activities are believed to be lucrative for comedians as commission fees are not collected by their management agencies in such operations.


"I can't make a living without underground operations," said a comedian in his 30s who belongs to a major entertainment agency.


"Although a number of comedians have become popular thanks to the rising number of TV programs featuring comedy routines, it is difficult for many of them to sustain their popularity," an entertainment industry official said.


"They have no choice but to conduct underground operations, because they have become well-known among the public and can therefore no longer take part-time jobs," the official added.


Such secret business activities are not illegal, but the possibility of proceeds from crime being used to pay comedians cannot be ruled out, according to informed sources.


The event in question that was participated by the Yoshimoto Kogyo comedians including Miyasako was held in December 2014.


Later, Tokyo's Metropolitan Police Department arrested people including a leader of the fraud group for allegedly swindling an elderly woman out of 5 million yen in cash in November-December 2014.


Although the event was held around the time when the group committed the crime, an investigative source said that it would be difficult to build a case against the comedians unless it is fully proven that the money to the entertainers came from the swindled money.


"The scandals have been used to slam those comedians, instead of holding antisocial groups accountable," said lawyer Takashi Ozaki, a member of a relevant committee of the Japan Federation of Bar Associations.


"We should consider how to help keep individuals and companies away from antisocial groups," he stressed. Jiji Press