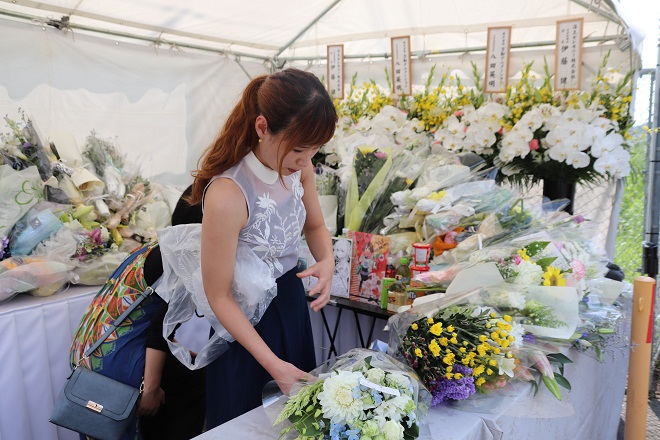 Kyoto--Anime fans, including foreigners, visited a Kyoto Animation Co. studio in Kyoto on Thursday to mourn for the lives lost in an arson attack last week.

Flowers, message boards and paintbrushes were piled on an altar set up some 100 meters from the burned No. 1 studio of the company, known as KyoAni, in the western Japan city.

A high school sophomore took an overnight bus with a parent to visit the studio from the western prefecture of Ehime. The girl said she once wanted to work for Kyoto Animation.

"I'm struggling to find closure, and I can't accept (what happened)," she said. "I hope (Kyoto Animation) will create beautiful works again."

On 41-year-old Shinji Aoba, suspected of conducting the July 18 attack that killed 34 people, the girl said he should tell the police about the circumstances of the attack.

A 26-year-old man from Taiwan said Kyoto Animation's works are famous also in Taiwan and that the attack was widely covered by the media there.

He said he is in the game design business and that anime changed his life.

He expressed wishes for the company's speedy recovery.

Takeya, a fan of the "K-ON!" popular television series produced by Kyoto Animation, said he hopes to thank the company for creating excellent works.

"I'll continue to watch KyoAni's works," Takeya added. He plans to visit the neighboring Shiga Prefecture, a place where the series is believed to be set.

A 20-year-old university student from China said he likes the "Sound! Euphonium" television series, which he watched online.

He added that he hopes Kyoto Animation will quickly recover from the tragic event.

In a statement, Kyoto Animation President Hideaki Hatta said that his irreplaceable companions lost their lives or were hurt in the event.

He said he has learned through media reports that many people around the world think about the company. This "provides precious support for us, who are fighting 'darkness,'" he stressed.

Kyoto Animation will continue to fight, together with those holding out their hands, in order to deliver anime that give people around the world dreams, hope and excitement, to bring happiness to its employees and staff, and to contribute to society and the community, Hatta said. Jiji Press