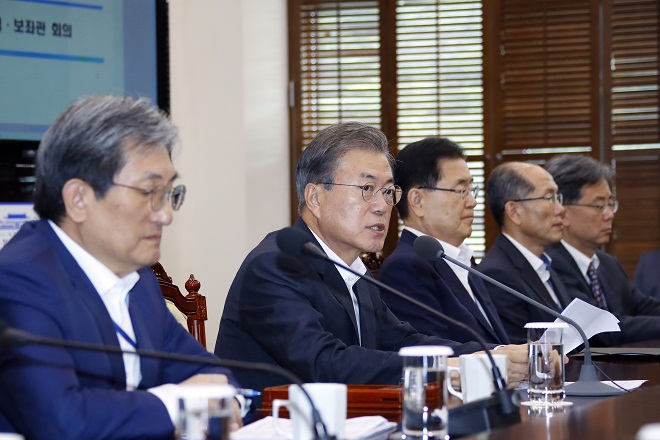 Taking action to damage the South Korean economy for political purposes and making remarks linking the measure to sanctions on North Korea with no reasonable grounds are undesirable for the friendship and security cooperation between South Korea and Japan, he said.

Moon's remarks, made during his meeting with senior officials of large domestic companies, were released by the Blue House presidential office.

Japanese officials, including Prime Minister Shinzo Abe, have cited inadequate handling by South Korea of chip materials exported from Japan as the reason for the stricter export controls, suggesting that some of the exported items were illegally transferred to North Korea.

The South Korean government is strongly resolved to urge Japan to withdraw the unjustifiable measure while preparing for countermeasures, Moon said.

Moon also said the possibility cannot be ruled out that the trade issue will be prolonged despite the South Korean government's diplomatic efforts to resolve the problem. South Korea has to make preparations for all possible options although this is very regrettable, he said.

Calling the current situation an unprecedented state of emergency, Moon stressed the need for the government and private-sector companies to act in close cooperation.

He indicated that South Korea needs to boost domestic production and overhaul in the long run its current industry structure, which heavily depends on certain countries, while trying to minimize damage to South Korean companies from the Japanese measure by diversifying import sources. Jiji Press