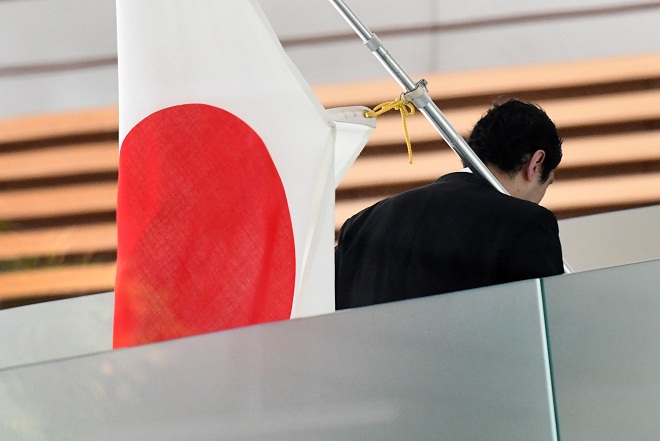 The drop in gross domestic product in real terms also reflected sluggish personal consumption and exports following a series of natural disasters, according to a revised report released by the government agency.

The annualized real GDP reading came against the median forecast of 1.9 pct decline among the 17 think tanks polled by Jiji Press.

On a nonannualized basis, the country's seasonally adjusted real GDP in the second quarter of fiscal 2018 shrank a revised 0.6 pct from the previous quarter, against a 0.3 pct drop shown in the preliminary report released last month.

The economy suffered negative growth for the first time in two quarters.

The pace of drop was fastest since the contraction of 1.9 pct, or an annualized 7.3 pct, marked in April-June 2014 in the aftermath of the consumption tax increase from 5 pct to the current 8 pct in April that year.

"Capital expenditures fell in July-September after growing for the seventh straight quarter and marking a sharp increase in the previous quarter," an official of the Cabinet Office said.

"The economy remains on a moderate recovery trend," the official said.

In July-September, capital expenditures fell 2.8 pct from the previous quarter, against the preliminary reading of a 0.2 pct decline. The drop, steepest since the 2.9 pct fall marked in July-September 2009, mainly reflected weak spending by wholesalers and retailers.

In nominal terms, July-September GDP contracted a revised 0.7 pct quarter on quarter, against a preliminary 0.3 pct fall. At an annual rate, the GDP fell 2.7 pct, compared with a 1.1 pct decline.

The Cabinet Office also said the country's GDP in fiscal 2017, which ended in March this year, grew 1.9 pct from the previous year in real terms and 2.0 pct in nominal terms. Jiji Press