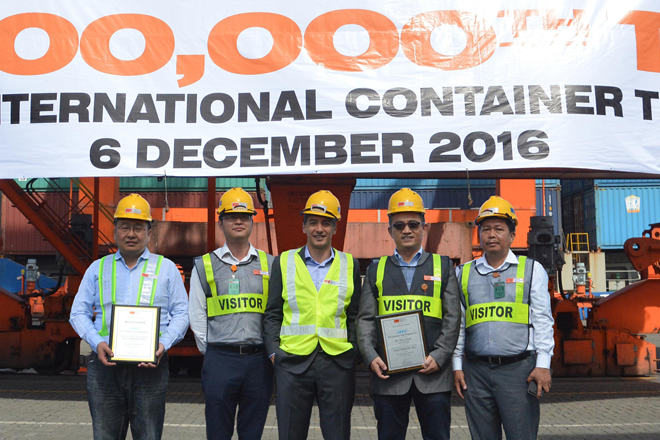 Nominated among the world’s top container terminals for several years, the MICT has an annual capacity of 2.75 million TEU.

The two millionth TEU container was offloaded from SITC Osaka, which is operated by Chinese megaliner SITC Container Lines.

The container vessel originated from Ningbo in China.  SITC is one of MICT’s longtime clients with regular vessel calls to the Port of Manila.  MICT reached its first one million-TEU move back in December 2002.

“Today represents a significant achievement for MICT as we continue with our mandate to provide the highest level of service to our clients and stakeholders, most especially to the Filipino people.  As the gateway to the Philippine market, MICT consistently seeks to improve our operational efficiency to ensure fast and uninterrupted flow of trade in and out of the port,” said Gonzalez.

Terminal utilization at the MICT has significantly improved since the completion of Yard 7 late in November 2015.  Yard 7, which is part of MICT’s PHP5 billion expansion project, increased the terminal’s capacity by 18 percent from 2.5 million to 2.75 million TEUs.

The two million milestone also triggers a multi-billion peso capacity improvement commitment with the Philippine Ports Authority that requires ICTSI to commission five additional post-Panamax quay cranes along with corresponding yard equipment, and build at least another berth by 2019.

Also, key to achieving the two million TEU milestone was the rollout the Terminal Appointment Booking System (TABS), an online container booking platform, in October 2015, which significantly improved and optimized the flow of trucks in and out of the terminal.

“The construction of Yard 7 and the implementation of TABS last year gave us the flexibility and efficiency we need to perform optimally.  We have more projects in the pipeline like the revival of the rail line which will link MICT with Laguna Gateway Inland Container Terminal,” said Gonzalez.

Aside from establishing an intermodal link between its Manila and Laguna terminals, ICTSI submitted a proposal to the Department of Transportation to build the Cavite Gateway Terminal (CGT), a USD30 million common-user barge and roll on–roll off terminal in Tanza, Cavite.

The 115,000-TEU facility, which will be built in a six-hectare property, will also be directly linked with MICT.  The transshipping of cargo from MICT to CGT and vice-versa will serve the dynamic economic activity of Cavite, and lessen the number of truck trips in Manila by approximately 140,000 annually. DMS