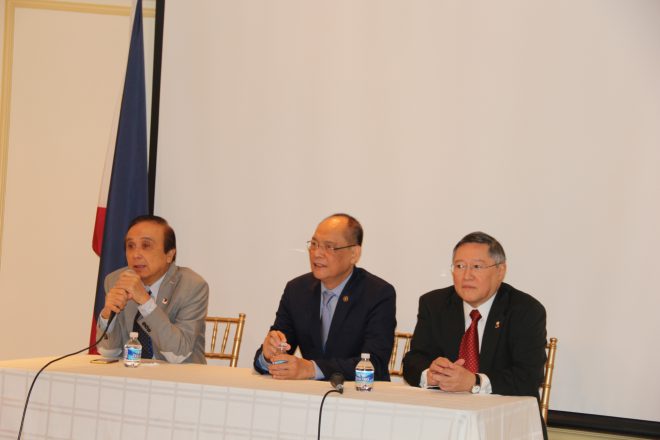 In a joint position paper, the economic managers of the Philippine government recommended funding the Unified Student Financial Assistance System for Tertiary Education (UniFAST) as a better alternative to proposed legislations on free tuition for all undergraduate students in state universities and colleges .

“We recognize that college education is important for Filipinos, based on the results of the focus group discussions and survey on AmBisyon Natin 2040,” Pernia said. “Many employers also prefer college graduates. However, we need to carefully study our options for helping people achieve their aspirations for higher education, considering other needs,” he added.

“The proposed free-tuition policy will benefit largely the non-poor students who predominate in SUCs (state universities and colleges).. In 2014, only 12 percent of the students attending SUCs belong to the bottom 20 percent of the family income classification based on the Annual Poverty Indicators Survey,” the economic managers said.

“Also, the budgetary support for free tuition will be difficult to sustain,” the Cabinet officials said in their joint position.

Tuition does not comprise the biggest share of college education cost. Based on the grant structure of the government’s Student Grants-In-Aid Program for Poverty Alleviation (SGP-PA)  cited in the joint position, tuition is one-third (P20,000) of the annual cost of PhP60,000 per student covered by the grant. Economic managers pointed out possible adverse implications of an across-the-board free tuition policy, including exodus of students towards SUCs from private higher  educational institutions, which would eventually affect the overall quality of graduates since a number of private higher education institutions perform better than SUCs.

They explained if college tuition funding requirement is to be based on the national average tuition fee of SUCs under the SGP-PA – which is at P20,000 per annum – the estimated 1.4 million students enrolled in SUCs would require about P28 billion of budgetary support from the government to cover the students’ total tuition fees

The bigger chunk of college education cost is for living expenses (at P35,000 for 10 months) and instructional materials (P5,000). Accordingly, with the government's provision of free tuition to all SUC students, poor families would still be unable to pay for the remaining two-thirds balance of college education cost, thereby still preventing them from sending their children to college.

Established in 2014 through Republic Act No. 10687, the UniFAST is designed to unify all modes of publicly-funded Student Financial Assistance Programs such as scholarships, grants-in-aid and student loans for tertiary education. The law provides full financing to deserving students, which generally favors the poor.

Thus, the economic managers stressed UniFAST’s other advantages over the across-the-board free tuition proposal. These include a clear delineation among its three modes of financial assistance in terms of objectives and target beneficiaries, applicability in both SUCs and private HEIs, a test-based eligibility requirement, and its adherence to the acceptable standards of the Commission on Higher Education.

“The government should implement its mandate of promoting quality and accessible education within the limits of fiscal prudence, and with the use of appropriate tools and targeting mechanism. The UniFAST is better designed to ensure a more efficient and effective use of government funds,” explained the economic managers. DMS